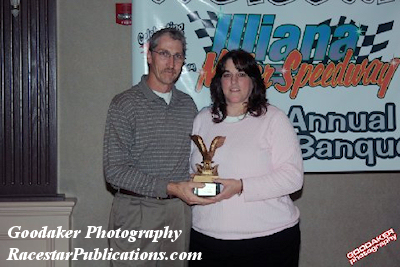 Schererville, IN - November 6, 2010 - It was something completely unexpected and exciting. Mike Mikuly, track owner/promoter of Illiana Motor Speedway, was standing at the podium during the 45th Annual Banquet of Champions at the Halls of St. George in Schererville presenting the Harry Molenaar Award of Excellence. It's one of the most prestigious awards presented at the annual affair, and when he said "This year we are proud to present this prestigious award to...Rich & Diva Rish from RaceStar Publications" Rich & I were both shocked. We both made the trek to the podium to accept the honor, still stunned and not knowing what to say, the words would not come. I was at an absolute loss for words.

After a short photo opportunity, we returned to our table with the award and exchanged our words of pleasure and disbelief at what we had just earned. It was at that time that we both realized that a speech of some sort had slipped past the opportunity at the podium, and it was at that point that I realized all that I could have (should have) said.

I wish that I would have had the pleasure to meet Mr. Harry Molenaar before his passing. This award has been presented to some very upstanding people in the racing industry, and for RaceStar to be named amongst them is a tremendous honor. Recongnition of this caliber is greatly appreciated and will be revered very close to us. With this being said, I cannot help but include the very very special people who have made RaceStar what it is today. It is with the unselfish help and dedication of the RaceStar photographers and writers, that attend the local events on a weekly basis, that I dedicate this award of excellence to all of them.

Meaning of the Harry Molenaar Award of Excellence