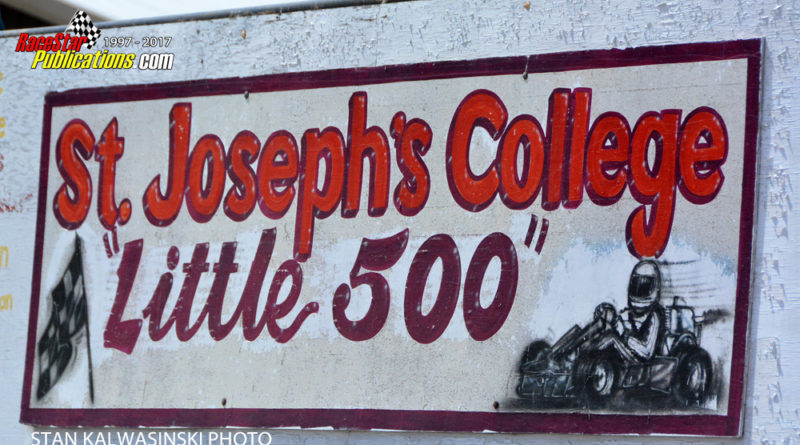 By Stan Kalwasinski
Rensselaer, IN (April 22, 2017) -Ready to close forever at the end of this school year, St. Joseph’s College held it 55th annual and final Little 500 go-kart race with Logan James of Logansport capturing the race for student drivers and Travis Kepner of West Lafayette, Class of 2013, winning the race for alumni competitors.

Thousands of alumni flocked to the SJC campus for what could be the final Little 500 race ever after it was announced last February that the school would be closing because of financial debt at the end of this school year.
The first race of the day was the alumni contest with Kepner putting on a strong showing, taking the checkered flag in front of six-time alumni race winner, Andrew Malone of Vincennes, who won the student race three times when he attended the college. Rensselaer’s Kyle Rayburn, who won the student race last year, finished third.  14 karts started the alumni battle.
The race for student racers saw nine karts on the starting grid with James and his ”Mr. Hollywood Racing” No. 77 dominating the competition.  Losing the lead briefly because of a pit stop, James, a senior at the school, finished ahead of Jennifer Kearney of Valparaiso and Alex McCormick of New Lenox, Ill.
Two red flags for crashes marred the student race that was stopped and called complete after 107 laps.
A historical note: the traditional event at SJC started in 1963, featuring man-powered, wooden ”push carts”.  In 1971, the race went to motorized go-karts with Ed Carter being the first winner of that event.  1952 Indianapolis 500 winner Troy Ruttman was the grand marshal of the race.