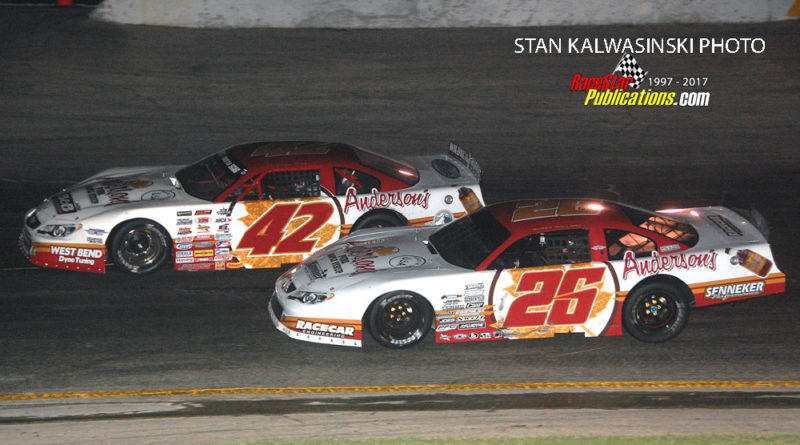 The 30-year-old Senoia, Ga., charger wheeled his Anderson’s Pure Maple Syrup-sponsored Chevrolet to the win, defeating Alex Prunty by 0.778-seconds at the checkered flag.  Steve Apel, Ty Majeski, Brad Keith and Jeff Holtz rounded out the top six with Derek Kraus, Ryan DeStefano, Austin Nason and Michael Bilderback making up the rest of the top 10.  A 23-car field started the race on the high-banked, quarter mile paved oval.  Seven yellow flags, in addition to a mandatory10-minute pit stop after 99 laps were completed, slowed the action.

Apel, a three-time track champion at the speedway, led most of the way during the first half of the race with 2015 race winner Dennis Prunty, who dropped out of the race after completing 78 laps, also leading some circuits.  At the 99-lap break, it was Apel, Alex Prunty, Majeski, Pollard and fastest qualifier Gary LaMonte, who later dropped out of the race with mechanical problems, making up the top five.  Earlier, LaMonte had turned a lap of 11.305 seconds to lead the 34-car qualifying field.

After the break, Majeski wasted no time and had the lead on lap 101.  Pollard began to close on Majeski around the 125-lap mark and was on the leader’s bumper at lap 133.  Pollard worked his way by Majeski for the top spot around lap 159.

On lap 169, Majeski got into the back of Pollard, sending the race leader spinning in turn four.  Majeski stopped on the main straightaway and tapped on his roof, indicating he was at fault which put Pollard back into the lead and sending himself to the end of the lead lap pack.

It was pretty much Pollard the rest of the way with neither Alex Prunty nor Apel putting up any challenge.

“I’m out of breath,” said Pollard right after his win.  “Those guys made me work.  We had a good race car and had to be patient.  We made some changes during the break that helped the car tremendously.

“We struggled last year and everyone wanted to count me out.  I’m coming back.  I’m not done racing up here.  I got embarrassed last year.  I had to make it up this year.  We’ve been working hard on our race car and the last couple of months, we’ve hit on something.  I ran him (Majeski) down and passed him.  That’s pretty good.”