FORT WAYNE, Ind. – Mel and Don Kenyon, considered two of the founding fathers of midget racing, were presented with the Rumble in Fort Wayne’s highest honor during opening ceremonies on Saturday night.

The Kenyon brothers were named as the co-recipients of the seventh David Lesiecki Award for Untiring Dedication and Devotion to Motorsports, recognizing their longtime commitment to both the Rumble itself and short-track auto racing as a whole.

The award was created in 2014 to honor the late Lesiecki, who passed away prior to that year’s Rumble and was instrumental in the operation and success of the quarter midget class at the event for many years.

Lesiecki‘s widow Diana and sons A.J. and Jonathan, who both raced 600cc micro sprints at the Rumble for many years, have remained an active part of the Rumble community and the event’s operational success.

Diana has maintained the quarter midget program behind the scenes since David’s passing with help from 2018 Lesiecki Award recipient Larry Ebert, while A.J. and Jonathan transitioned over to lead the technical inspection side of the micro sprint program this year instead of racing in their own rights.

The Lesiecki family wanted to honor someone this year that had been intertwined with the history of racing in Fort Wayne, Ind., since the beginning, and the Kenyons fit that bill perfectly.

“Looking at who races here year after year, there’s no one else who has shown more dedication to this event than Mel and Don Kenyon,” said Diana Lesiecki. “Attending the first-ever indoor races in Fort Wayne in the old building in 1955 make them, perhaps, the longest tenured racers in this city. They brought three cars to this weekend’s event, and they traditionally keep their drivers in contention year after year when it comes time to go Rumble racing.”

“It is our honor to place Mel and Don alongside the previous recipients of the David Lesiecki Award and we thank them for being tremendous ambassadors for the sport that we all love so much.”

The Kenyon family’s 3K Racing operation has won one career Rumble in Fort Wayne midget feature, coming on Dec. 31, 2016, when Kyle Hamilton took the flagship yellow No. 6 to victory lane.

Mel Kenyon, however, has only missed one year’s worth of indoor racing in history when it comes to the city of Fort Wayne. He has appeared either as a driver or car owner in every major Fort Wayne event dating back to 1955, with the exception of 1965, the year he was severely burned during an Indy car crash at Langhorne (Pa.) Speedway. 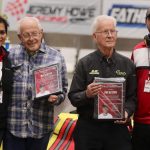