75 years ago in 1948, a new automobile race track appeared on the local scene with the opening of the Rockford Speedway.

In early April of 1948, it was reported that the new quarter-mile, high-banked, paved oval was to be part of a weekly American Automobile Association (AAA)-sanctioned midget circuit, which was set to also include Chicago’s Soldier Field, State Fair Park in Milwaukee, Rendezvous Bowl in Dowagiac, Mich., Sun Valley Speedway in Anderson, Ind., Walsh Stadium in St. Louis and the 16th Street Speedway in Indianapolis.  Jay Hart was listed as the promoter of the new Illinois oval.

According to historians, the idea of the Rockford Speedway took place in the fall of 1947.  The idea and the setting up of a corporation was brought about by Jim Wagner, who at the time was closely associated with the owners of the South Bend (Ind.) Speedway – a quarter-mile, high-banked paved track built in 1946.  Plans were drawn up during the winter months and contracts were let for construction.  The land, some 30 acres along Route 173 – seven miles north of Rockford, was purchased.

The original opening date was set for May 19, 1948 but rainy weather put a damper on that.  Wednesday evening, May 26th, saw the speedway open for its first racing program as a reported 4,800 fans saw California’s Johnny McDowell and his Offenhauser “Offy” engine-powered Jimmie James Special defeat fellow California racer Eddie Haddad and Colorado’s Lloyd Axel in the main event.  Bill Vandewater, a few years from becoming the official starter at the Indianapolis 500, was the flagman that opening night with legendary racing announcer Ed “Twenty Grand” Steinbock handling the public address chores.  Wisconsin racing photographer Armin “Army” Krueger was there to cover the action for the weekly racing newspaper – National Speed Sport News.

During Rockford’s inaugural season, AAA midget racing was the weekly mainstay with the small, open-wheel cars competing every Wednesday night.  The speedsters of Andy Granatelli’s Hurricane Hot Rod Racing Association made their first appearance at the new Rockford oval on Saturday night, July 17th.  The midgets made their final weekly appearance on September 8 with Eddie Haddad grabbing the win in the feature race.  Willie Sternquist, from Evanston, Ill. and the winner of several previous hot rod races at Rockford, closed out the season by winning the hot rod finale before a capacity crowd on Sunday afternoon, October 17th.  Midget champion Tony Bettenhausen was recorded as Rockford’s first track titlist.

Harvey, Shear and Aase each wrapped up their third career titles at Rockford in the early 1960s with Chicagoland racers Gene Marmor, Bob Chapman and Whitey Gerken also winning track championships.  Second generation driver Joe Shear put together an impressive string of six Rockford championships in a row between 1967 and 1972 with Dave Watson grabbing honors in 1973.

Track owner and promoter Hugh Deery introduced his more economical “Rockford Rules” late model specs for the 1974 season with Jerry Lewis winning the championship.  Deery was once an usher at the speedway before taking over full control in 1966.  Deery and the speedway’s director of competition Bill Earnest presented the National Short Track Championships 200 in 1966 with Wisconsin’s Dick Trickle winning the inaugural event.

Other late model track champions during the 1970s included Dennis Burgan, Wayne Lensing and two-time winner Don Leach.  Lensing would win another title in 1980, giving him a total of three career championships.  John Luther with two, Dave Fossum, Bobby Hacker with two, Jimmy Pierson and John Knaus with three in the 80s were among Rockford champions.

Over the years, the National Short Track Championships has been the premier race of the season at Rockford, usually a season-ending affair for late model stock cars.  Joe Shear and Steve Carlson are the all-time winners of the event with each having taken eight career checkered flags.  Eddie Hoffman with four, Trickle with three and Rick Bickle Jr., Jeremy Lepak, Steve Rubeck, Alex Prunty and Casey Johnson with two each are other multi-time winners.  Last year saw Austin Nason win the 188-lap NSTC which was run under the rules of the Big 8 Series.

Track owner and promoter Hugh Deery passed away suddenly in 1984 at the age of 63.  His wife Jody, with the support of their eight children along the way, continued her husband’s passion for race promoting until a few years ago because of health issues.  Jody Deery left this world June 13th of this year at the age of 97.

“I believe that (auto) racing is entertainment,” said Hugh Deery in an interview with motorsports writer Al Stilley years ago.  “If I can get a customer here once, and if we don’t get him back, then it’s our fault.  We want to entertain the guy that comes to Rockford Speedway twice a year.  The guy that comes once a year, I want him to come twice a year.  We’re not going to get everybody every night.

“We always have something special – tire-rolling races, grocery cart races, skateboard contests, bicycle races, back-up races, balloon races, a penny gold rush and team races.  Success is planned, beaten and forged out of a rough piece of iron…it doesn’t happen by magic.  As long as I’ve got an empty seat and standing room available, my job isn’t done.”

A big celebration will take place this Saturday evening at the Rockford Speedway.  Hugh and Jody Deery would have enjoyed it. 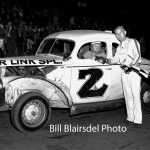 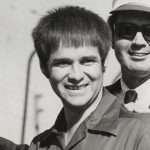 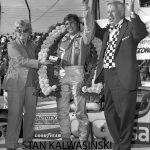 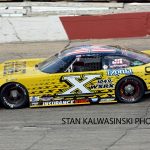