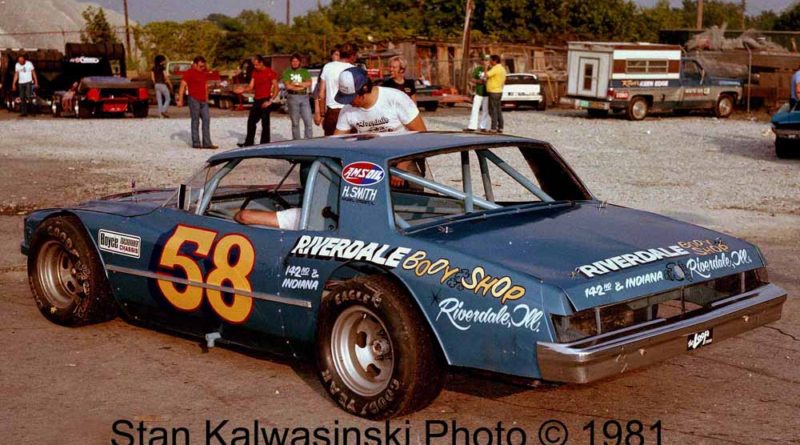 Laxton started his racing career at the Chicago area speedway around 1976, racing in the track’s hobby stock division.  He won 10 feature races in hobby stock action at the tight, quarter-mile, paved oval in 1978, finishing third in the points standings.  Laxton moved into the sportsman ranks in 1979 and finished sixth in the standings with two feature wins to his credit.

1980 was Terry Laxton’s year at Raceway as he wheeled his Riverdale Body Shop-sponsored 1977 Camaro “350” No. 58 to an incredible 33 feature wins and claiming track championship honors for the sportsman division.  At one point during his championship season, he captured 14 of 15 feature races, propelling him to the season crown.

Racing out of Midlothian, Laxton won another 18 sportsman features at Raceway Park in 1981 with him settling for second place in the final points tally.  1981 saw Laxton also compete at the Grundy County Speedway in Morris, Ill., in his 1980 Monte Carlo.  He finished fifth in the speedway’s sportsman division ranks, winning three feature races at the third-of-a-mile paved oval.  He closed out the season at the Rockford Speedway with a good run in the track’s 100-lap main event for “Rockford Rules” late models during the track’s annual National Short Track Championships event.

Laxton was an on-again, off-again, late model stock car competitor at Raceway Park, enjoying his best season in 1991 when he won one feature race and finished 11th in the points.  He won his first late model feature race of his career in 1987 when he grabbed a victory during a three 30-lap Monza Classic event on Labor Day.  Laxton finished 12th in Raceway’s late model standings in 1993 and 19th in 1994.  Laxton’s career feature win total at Raceway Park would number 65 victories, including late model, sportsman and hobby stock main events.