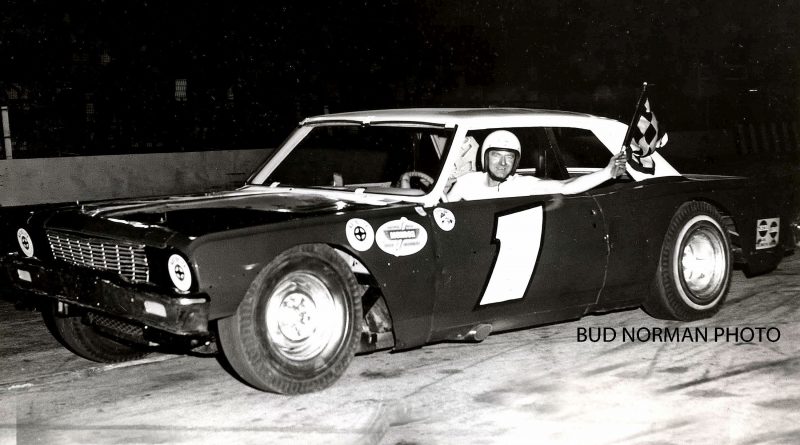 Chicago, Ill.—During the heyday of Chicagoland’s Raceway Park, Ted Janecyk was part of the “give no quarter, take no quarter”-style of stock car racing, competing for more than 30 years at the “World’s Busiest Track.”  Janecyk, who lived in Calumet Park, Ill., across the street from speedway since 1951, passed away Thursday at the age of 90.

Janecyk raced hard like his fellow competitors, using a little “bumping and running” to get the job done.  The likes of Bud Koehler, Bob Pronger, Bill Van Allen, Bob Williams and Tom Cox, plus another dozen or so potential winners, were Janecyk’s competition.

Janecyk began racing there full-time in 1953 and won his first feature race on September 5, 1954 with the race being televised live by WBKB-TV- Channel 7.  Janecyk would win a total of 96 feature races at Raceway Park during his racing career which would come to a close in the mid 1980s.

“I was driving through Chicago one day and saw a ’39 Ford Coupe,” reminisced Janecyk recently about his earliest days in racing.  “I brought it to Raceway to race it and I didn’t know how to drive or anything.  I wasn’t sure I wanted to drive a race car, but I was going to let somebody drive it.  (A track regular) George Klupping didn’t have a car to race (that night).  He crashed his or something.  I told him if he could qualify for the feature race, he could race my car.  He didn’t make the feature so I took it home and restored it.”

Before Janecyk started his own driving career, he was a pit crew member at Raceway Park.

“A guy named Al Gierz said he raced in California and he had a Mercury,” remembered Janecyk.  “I was one of the pit crew for him.  I didn’t even know what a pit crew was in those days.  He never qualified for anything except the consolation race.  They would have a dead start and every time he got on the back straightaway, he would crash into somebody and smash his radiator.”

“I didn’t really want to drive it,” remembered Janecyk.  “The car would go into the turns and start rolling over.  I started the race but after several laps every time you’d tap the brakes to go into the turn the pedal goes all the way to the floor.  All of sudden I have no brakes so I coasted into the pits.  That was the end of that.”

Janecyk worked on the ’41 Buick, repainted it and numbered it No. 3 for the 1953 season – his first full season of driving.  He chose number ‘3’ because he had three kids.  Raceway regular Rich Sutkus already had a number ‘3’ so Janecyk added a ‘T’ and ‘3T’ became his number for about the next nine years.  His Buick was demolished on Memorial Day so he built from scratch a ’42 Buick, calling it a 1946 or ’47 model and raced that the rest of the year.

1954 was a “breakout” year for Janecyk as he won his first feature race in his Olds-powered 1950 Pontiac, ending the season with a total of three wins and seventh in the points behind champion Bud Koehler, Bob Williams, Tom Cox and others.

“Bob Pronger told me (the night of my first feature win) that the track’s all wet (from rain),” said Janecyk looking back.  “When you go out there, just run the outside (groove) close to the wall all away around.  He said if you try and run on the pole, it was be real slippery.  Thanks to him, I won my first feature.

“I started to run a lot better.  I believe I won my second one (feature) by spinning seven of the top drivers out to win it.  Bob Williams cut down on me right in front of (starter) Tom Plouzek and I spun him into the infield.

“I found out that Oldsmobiles were faster,” said Janecyk.  “I hung around Tom Cox’s peoples’ garage a lot.  He was racing an Oldsmobile.  I got a Pontiac and you could have an Oldsmobile motor in a Pontiac.”

Janecyk drove the Pontiac in 1954 and 1955, winning three features in his Pontiac No. 3T in 1955, along with two “convertible” main events.  He was driving Stash Kullman’s ‘50 Olds No. 4U in 1957 until Raceway Park rules called for “late models only”  before half the season was completed.  He built a late model ’56 Chevy and, later, a ’56 Olds, but did not score a feature victory for a number of years.  A new ’57 Oldsmobile, built in Stash Kullman’s garage, in 1961 brought Janecyk his first feature win since 1955.

Janecyk drove for car owner Dave Roulo in 1962, wheeling Roulo’s ’57 Chevy No. 1 to an impressive 12 feature wins, including the 100-lap Season Championship race.  He joined forces with Bill Koenig in 1963 to drive Koenig’s Jerry’s Auto Parts-sponsored ’62 Chevy No. 1.  The Janecyk/Koenig combo went back many years with Koenig helping Janecyk with the original ’41 Buick.

“Billy Koenig came to me and asked me if I wanted to drive for him next year (1963), said Janecyk.  “He was building a new car.  Billy being so good with motors and stuff, I thought we’d make a good combination.”

Using up a couple of red and white Chevrolets during the season, Janecyk ended up winning 13 main events during the year, including another 100-lap Season Championship run.  The Janecyk/Koenig team had another stout year in 1964 with Janecyk winning 17 feature races.

Koenig put together a new short wheelbase Chevelle for Janecyk to wheel in 1965.  First powered by a 409 cubic inch engine and, later, a 396, the Chevelle No. 1 was fast and Janecyk never seemed to waiver on his quest for his first Raceway Park late model title.  Janecyk was the dominate driver at the speedway that year, winning 27 feature races, 20 heat races, nine trophy dashes and setting fast time 33 times.  Janecyk was the first driver to get around the Raceway Park oval in less than 13 seconds, establishing a record of 12.96 seconds on June 19, 1965.

With a dozen years of racing under his belt, Janecyk sailed to the championship only to see a tangle with Johnny Kapovich during the Season Championship race end the winning-season prematurely with Janecyk suffering a broken foot in the crash.  Janecyk accepted his championship trophy on crutches and with his foot in a cast.

Janecyk retired from racing and pretty much sat out the following year with Bud Koehler becoming Bill Koenig’s driver, which would lead to six Raceway Park championships for the new combo.  Janecyk came out of “retirement” to wheel Woody Church’s ’64 Ford Fairlane No. 55 to a sixth place finish in Raceway Park’s annual 300-Lap Classic in mid-September of 1966.  Now being driver and car owner again, Janecyk brought out a new blue ’66 Chevelle No. 1 around August of 1967 with him ending up winning three feature races and claiming 12th in the final Raceway Park standings.

1968 saw Janecyk behind the wheel of the same ’66 Chevelle with the former track champion winning two feature races and finishing fifth in points. He finished seventh in the 300.  Late model stock cars were not part of the opening programs at Raceway Park in 1969 with Janecyk doing a little traveling here and there before the “full-bore” eight-cylinder cars returned in July.  He would reskin his Chevelle during the season with the car now having a black vinyl roof with Janecyk’s now familiar number ‘1’ still on the sides.  Janecyk would go winless in ’69.

Janecyk drove his Chevelle to Raceway Park’s opening day late model feature race honors the next year (1970), winning the 30 lap main event on April 25, 1970.  He would win a total of five feature races and finished fifth in the standings.  He was 11th in the Raceway Park standings in 1971 with no feature wins to his credit as he wheeled a new Camaro.

Janecyk was seventh in the points standings in 1972 and eighth in 1973 with no feature victories.  He moved up to sixth in the final standings in 1974 and claimed one feature win and finished third in the 300 lapper.  Janecyk turned in a solid year in 1975, nailing down four feature wins and holding down fourth place in the standings at the season’s end.  1976 was another good year for Janecyk – sixth in points and four more feature wins to his credit.  Those would be his final feature wins at Raceway Park, giving him a career total of 96, including two convertible division wins in 1955.

Running a lesser schedule year after year at Raceway Park, Janecyk wound up 11th in the points in 1978 and 19th in the standings in 1985, which was pretty much his final season of competition.

Over the years, Janecyk had many jobs, including being a milkman, self employed as a petroleum equipment repair man and a truck driver into his 80s.  He even played a steel guitar in a country and western band.

“I did everything when I was a kid,” said Janecyk.  “I was a pin setter at the Rose Bowl in Roseland and I had a Herald American newspaper route.  I had all of Calumet Park.”

Born in Calumet Park, Ill., on December 2, 1929, Ted Janecyk matched his skills and wits against some of the toughest stock car competition in the Midwest. 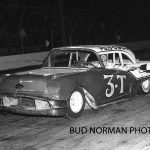 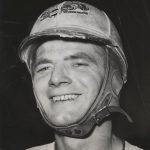 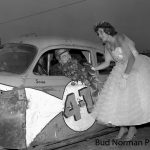 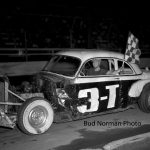 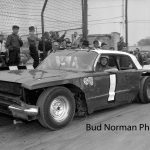 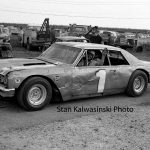 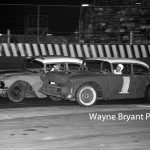 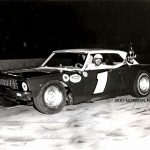 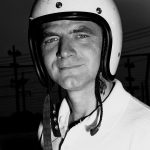 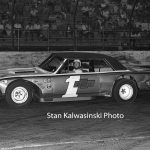 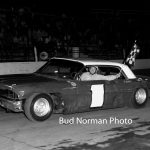 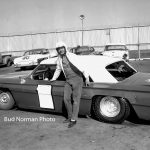 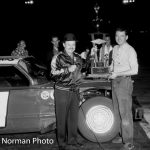 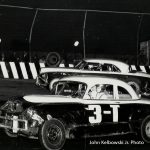 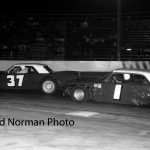