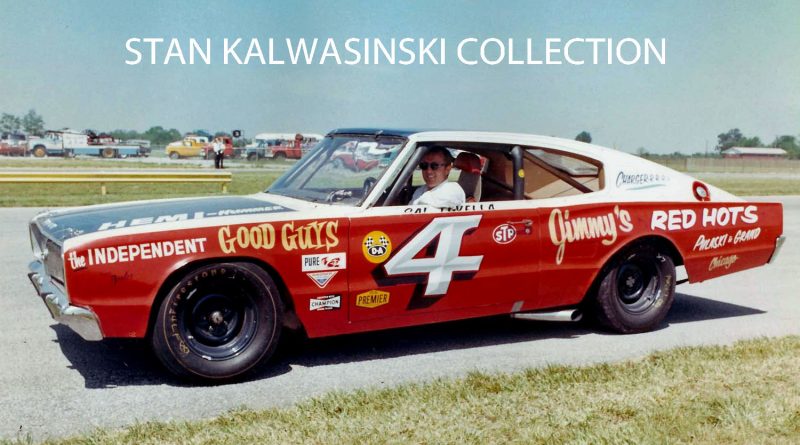 Chicago, Ill. – Chicagoland stock car driver Sal Tovella, who made a name for himself on both the local and national racing scenes, passed away on Sunday, March 10, at the age of 90.  A product of Chicago’s northside, Tovella began racing stock cars at Soldier Field around 1950 with Andy Granatelli’s Hurricane Hot Rod Racing Association supervising the racing action which was sometimes “staged” to provide more thrills.  A deliberate crash or, better yet, a rollover provided fans their monies worth.

Tovella scored his first feature race victory at mammoth Chicago arena on June 21, 1952.  Tovella and his “battered” ’49 Ford won the 25 lapper before a reported crowd of 18,846.  A regular at the “Field” for many years, Tovella, who even drove an Edsel for a time, captured the track’s late model stock car championship in 1963 after a season-long battle with rival Bob Chapman.  A “double-points” 100-lap victory on June 29, 1963 helped push Tovella and his ’63 Chevy II to the championship.  Tovella had the distinction of winning the last stock car feature race ever held at Soldier Field, scoring the win on June 9, 1968.

Tovella was a long time competitor on the old United States Auto Club (USAC) stock car circuit.  Tovella was USAC’s “rookie of the year” in 1963, although he made his first USAC start in 1957.  Tovella garnered his first USAC stock car victory on July 30, 1966 at the Mosport International Raceway in Bowmanville, Ontario, Canada.  Tovella piloted his ’65 Plymouth to the win in the second “50-lap heat” on the 2.5 mile road course, defeating Billy Foster and Roger Regeth.

One of his most memorable victories was his first USAC win at the famed “Milwaukee Mile” on August 10, 1975.  Behind the wheel of his ’72 Plymouth, prepared by his brother Fred, Tovella took the checkered flag in the 200-miler ahead of Ramo Stott, Roger McCluskey, Butch Hartman and Larry Moore.   During his career, Tovella posted a total of six USAC stock car victories, his last coming in 1980 on the one-mile dirt track at DuQuoin, Ill.

From time to time, Tovella would also try his luck in NASCAR Grand National (today’s Monster Energy Series) competition.  Tovella would compete in a total of 14 NASCAR events during his career, dating back to 1956.  Tovella finished 16th in the NASCAR GN event held at Soldier Field on July 21, 1956,  “Fireball” Roberts was the winner with Tovella and his ’56 Ford dropping out with brake problems.   Tovella would race in the Daytona 500 five straight years from 1960 through 1964 with a 14th place finish in 1961 in a ’61 Ford being his best Daytona effort.

Tovella had been in the used car business for most of his life operating his car lot – Sal’s Auto Sales for years on Chicago’s Milwaukee Avenue and later in Elmhurst, Ill.

Race fan, writer and historian, John Carollo once reminisced, “Sal’s race shop was not at his infamous used car lot on Milwaukee Avenue. It was a few blocks away and in one of the more, shall we say, ‘active’ neighborhoods in the city. I knew the area. My cousin Mike lived nearby and I all but lived there. The neighborhood around Sal’s shop was one where you could fire up a 750 horse Hemi with no mufflers at any hour of the day or night and not bother anyone. It’s not that the shop was out in the sticks; quite the opposite. It was deep in the city, about a block or two from Western Avenue.”

After his driving career was over, Tovella founded the International Racing Association, a sanctioning body for USAC/ARCA-style cars that ran a full schedule of races from 1982 through 1985.

A resident of Addison, Ill., Tovella was inducted into the Illinois Stock Car Hall of Fame in 2012.

A Chapel Service of Christian Burial will be celebrated promptly at 11:00 a.m. Entombment at Queen of Heaven Cemetery, Hillside, Illinois.