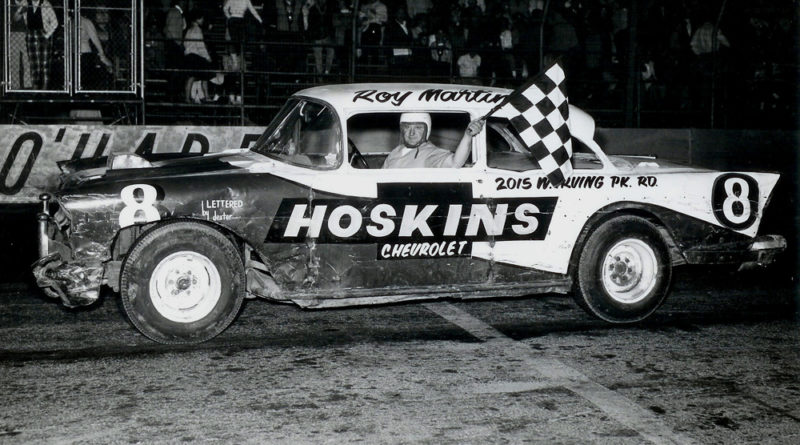 Chicagoland stock car champion Roy Martinelli passed away in Arizona at the age of 88 on February 14.  Much of Martinelli’s success in racing came at O’Hare Stadium, which was located in Schiller Park, Ill., right in the shadow of Chicago’s O’Hare International Airport.

Racing out of Prairie View and Half Day, Martinelli was O’Hare’s late model track champion in both 1965 and 1966.  He wheeled his “Pride of Half Day” ’64 Chevy convertible No. 7 to the title in 1966 at the banked, quarter-mile, paved oval, capturing 16 feature race wins along the way.  1966 saw Martinelli finish second to winner Dick Trickle in the inaugural National Short Track Championships 200 lapper at the Rockford Speedway.

The year before (1965) Martinelli was O’Hare’s late model champion for the first time, winning 11 feature races during the season.  With his brother, Reno, along with Tom White, doing the wrenching on the car, Martinelli, using a Dick DeVroeg-built engine, won the track’s O’Hare American 500 in a then-record time, defeating Leroy Roberts and Bob Dotter in the marathon chase.

Prior to his championship seasons, a third place finish in the points in 1962 with seven feature wins to his credit in a ’61 Chevy No. 8 was Martinelli’s best effort at O’Hare.  He won his first late model feature race at O’Hare on June 14, 1961.  Martinelli was O’Hare modified stock car champion in 1956 – the first year of operation for the new speedway.  Martinelli had the distinction of winning the final late model feature at the raceway, winning the main event on September 7, 1968.

Over the years, Martinelli and his brother, Reno, would field two or three late model Chevrolets for the racing action at O’Hare with the likes of Erik Johnson, Roy Czach, Rob Chauncey and Bill Shoulders wheeling the cars numbered 6, 7 and 8.  Johnson was part of the Martinelli racing team for many years, winning O’Hare late model championships in Martinelli-owned equipment three times.

Martinelli, who owned and operated Hiland Auto Service Center in Half Day, was involved in several serious-looking accidents at O’Hare over the years.  1963 saw Martinelli crash and flip in his black Chevy convertible.  In mid-June of 1966, with a stuck throttle he crashed hard in his Chevy convertible, flying over the retaining wall, through the wheel fence and into the pit area.  He escaped serious injury.  His mother, watching Martinelli race for the first time, witnessed the accident.

Martinelli’s earlier racing career took place at such tracks as Waukegan Speedway, Santa Fe Speedway, Mance Park and at Wilmot, Wis.  Martinelli was the stock car champion at Waukegan Speedway for two consecutive years, 1954 and 1955.  He was a feature winner at Santa Fe in 1954 and in 1960 won the track’s 100-lap season headliner, which would eventually become known as the speedway’s annual National Clay Track Championship.

Martinelli was inducted into the Illinois Stock Car Hall of Fame in 2013.