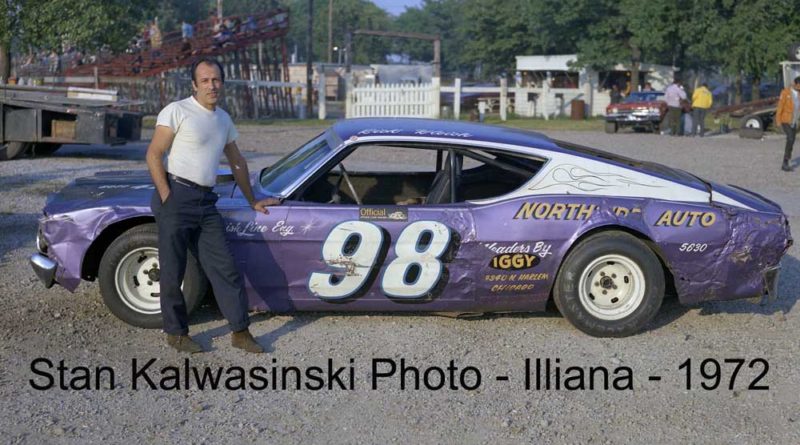 Former Chicago area stock car racer Rick Kleich passed away in South Carolina on June 12 at the age of 83.

Born on December 12, 1934 and a resident of Chicago during most of his racing years, Kleich was listed on the driver roster at Blue Island’s Raceway Park in 1954, driving a 1946 Ford No. 100.  Kleich was involved in three rollovers during the season and won a backup race at the “World’s Busiest Track” in early July of 1954.

Kleich spent time racing at O’Hare Stadium in Schiller Park, Ill.  On July 30, 1960, he wheeled a 1957 Chevy, usually driven by Tom Pistone, to the victory in the 100-lap NASCAR Summer Championship race.  With Pistone away competing in NASCAR Grand National competition, Kleich piloted the Pistone machine to victory over Roy Martinelli and Leroy Roberts.  He won another O’Hare feature race on August 19, 1961 ahead of Pistone and Martinelli.  Kleich was 21st in the O’Hare points standings in 1958, 25th in 1959, 14th in 1960, 30th in 1964 and 19th in 1966.

In 1963, Kleich enjoyed the biggest victory of his racing career.  Kleich was the winner of the 100-mile Mid-America Championship late model stock car race at Meadowdale International Raceways in Carpentersville, Ill., on September 29, 1963, wheeling his 1962 Chevrolet No. 44 to victory on the two-mile road course.  With the event sanctioned by the American Racing Organization (ARO), many of the cars in competition were from O’Hare, where the ARO group headed by Frank “Ham” Lobaza, officiated the races.  Kleich won over $2,000 for his winning efforts at Meadowdale that day as he defeated Bill Shoulders, Eddie Meyer and fastest qualifier Bay Darnell.

Kleich also competed in United States Auto Club (USAC) stock car competition from 1958 through 1973 with most of those years being made up mostly of one or two starts a year although he made eight starts in both 1963 and 1964.  He had three “top 10” finishes at the “Milwaukee Mile” with a sixth place finish in a 1964 Ford during a 250-mile chase on September 20, 1964 being his best effort as he finished behind winner Parnelli Jones and  the other top five finishers that included Rodger Ward, Norm Nelson, Sal Tovella and Len Sutton.  A seventh at Milwaukee in 1966 and a ninth place finish at the “Mile” in 1967 in his black 1965 Chevelle No. 50 were other highlights of Kleich’s USAC career.

Kleich had “freshened up” his ’65 Chevelle for short track action for the 1968 season only to sell the car to Bob Pronger on opening day at Soldier Field.  Pronger wheeled his new purchase to victory on that Sunday afternoon in early May.

Kleich was involved in a scary-looking accident with Jim Hardin during the early laps of the 1970 Tony Bettenhausen Memorial 100 late model race at Illiana Motor Speedway in Schererville, Ind.  Kleich and Hardin tangled and crashed hard into the outside guard rail in turn four with both cars leaping into the grandstand area.  Luckily, no one was seriously injured.  Kleich raced at Illiana on a regular basis in 1970 and finished eighth in the final points with several feature wins to his credit.

Kleich purchased Dick Trickle’s winning 1971 Ford Torino for the 1972 Chicago area racing season.  He competed at Illiana, the Rockford Speedway and other area raceways.  He put a Nova body on the Trickle chassis a year of two later, racing at the Waukegan Speedway.  A highly-regarded engine builder by trade, Kleich owned and operated Finish Line Engineering for a number of years.

Kleich’s son, Rick Kleich Jr., competed in late model action for several years in the Chicagoland area with a second place points finish in 1988 at Illiana behind champion Tony Hertko.  The family relocated to South Carolina a number of years ago.

***Photos by Bob Brown from the Bob Pochinskas Collection, along with additional photos by Ed Coffey, Vince Mayer and Stan Kalwasinski, give a glimpse of Rick Kleich’s racing career.***