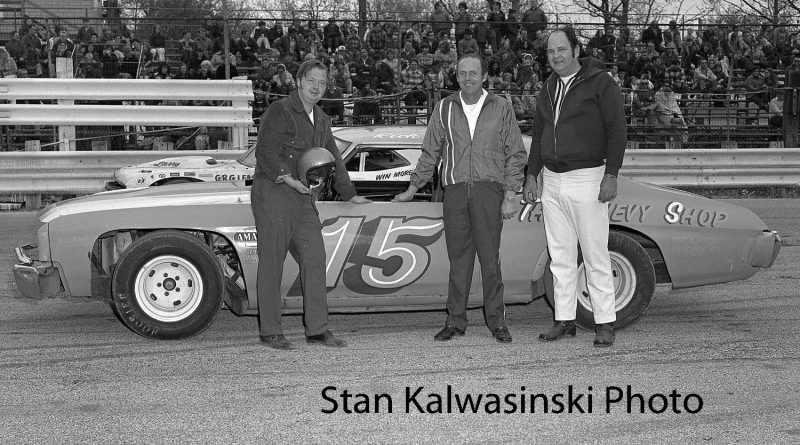 Rinehart, who for many years owned an auto body repair shop (R&R Auto Body) in Hammond, was part of the racing scene at the now-closed Illiana Motor Speedway in Schererville, where he both competed and officiated as the track’s pit steward.

Racing out of Hammond, Rinehart was the 10th ranking driver at Illiana in late model stock car action in 1963 and won several feature races on the half-mile paved oval the following year (1964).  Ending his driving career, Rinehart fielded a late model car as a car owner for a year or two.  Soon after, Rinehart began handling the pit area duties for Illiana owner, Harry Molenaar, a position that Rinehart held till about 1978.

When late model stock car racing was introduced at Raceway Park in Blue Island, Ill., in 1957, Rinehart was among the competitors, battling the likes of Bud Koehler, Bill Van Allen, Tom Pistone, Bill Cornwall, Bill Brown and others.  Rinehart, wheeling a 1957 Plymouth convertible, scored one feature win during the ’57 season and was among the top drivers in point standings in mid-August.  A two-week stint with the Army Reserves in August put a tamper on Rinehart’s racing but he still finished eighth in the final standings.

The Plymouth was formerly driven by Rinehart’s brother-in-law, Don Oldenberg, who competed in both local and NASCAR competition, dating back to the early 1950s.  Oldenberg was a factory-backed driver for Plymouth in the early part of 1957 in NASCAR’s convertible division.

Earlier in his career, Rinehart travelled through Indiana and Ohio, competing at tracks like Indiana’s Lafayette Speedway and the Cincinnati Race Bowl in Ohio, wheeling a 1954 Buick in 1955 and competing against drivers such as Jack Farris, Jack Shanklin, Andy Hampton, Bobby Hunter and others.

During the 1955 season, Rinehart competed in several SAFE “Circuit of Champions” events.  SAFE stood for the Society of Autosport, Fellowship and Education with Oldenberg being the champion for the ’55 campaign for the all-convertible stock car circuit that included races from New York to Texas and Canada.

Rinehart is survived by his three daughters, Kathy, Carol and Karen and their families.  Rinehart’s wife of 63 years, Yvonne, passed away on July 5, 2018.  The Rineharts had been living in Monticello, Ind., and were the former owners of the Lakeside Resort there.