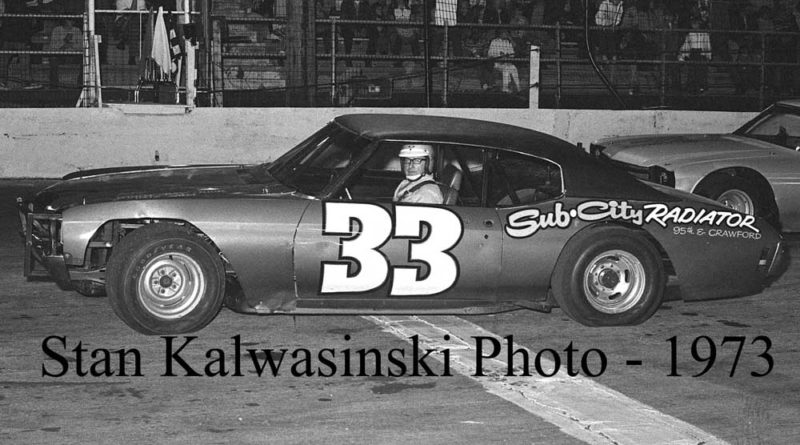 Former Chicago area stock car driver and car owner, Paul Bauer of Garden Homes, Ill., passed away Wednesday, November 8, 2017 at the age of 85.  For many years, Bauer and his No. 33 stock cars were part of the stock car action at Blue Island’s Raceway Park.

Bauer teamed up with 1955 Raceway Park champion Tom Cox in 1960 as Bauer fielded a ’57 Chevy No. 29 for Cox.  The Bauer/Cox team competed at Raceway as well as at several other local speedways.  He also drove some himself at Raceway and finished 22nd in the final standings.  Bauer wheeled a ’57 Chevy in 1961 and claimed 17th in Raceway points.

On opening day, 1964, Bauer had a new ’63 Chevy ready for the Raceway Park wars.  Bauer, along with Johnny Slowiak, would share the driving chores.

For the 1965 season, Bauer again was a car owner, putting together a fresh ’64 Chevrolet No. 33 for Blue Island’s Jerry Kemperman to drive.  Kemperman was again the “wheel man” for Bauer’s gold/black trimmed ’66 Chevrolet in 1966.  Kemperman won a total of 11 feature wins at Raceway Park over the two-year period.  Kemperman whistled around the Raceway oval in 12.70 seconds on August 20, 1966 in Bauer’s ’66 Chevy to set a new qualifying track record

Bauer came back as a driver at Raceway Park and finished 8th in the points in 1967, wheeling a ’66 Chevy, and seventh in 1968.  He claimed his first career late model stock car feature race win at Raceway during the’68 racing season.

Bauer turned his attention to the United States Auto Club (USAC) stock car series for several years, beginning in 1969.  Over a three year period (1969 – 1971) Bauer competed in 14 USAC events.  A 10th place finish at the Missouri State Fairgrounds in Sedalia, Mo., in 1969 was Bauer’s best finish on the competitive USAC circuit.

Working in his garage on Avers avenue, Bauer put together a brand new ‘72 Chevelle for the 1972 season at Raceway Park.  With his new No. 33 that had several innovative features, he was sixth in the points in 1972 and won one feature race – on June 25th defeating Bud Koehler and Jerry Kemperman in a 22-car field.

Bauer enjoyed his two best seasons at Raceway Park in 1973 and 1974, finishing third in the point standings both years and winning five feature races during the two-year span, including the 100-lap Spring Championship in 1974.

After his racing days were over, Bauer kept himself busy working for the Izzo Family during their promoting days at local dirt ovals including the LaSalle Speedway.

Former mechanic and racer, Kyle Harvey, who spent some 10 years as a spotter in NASCAR for Dale Earnhardt Jr.’s JR Motorsports, spent a lot of time at Bauer’s garage when he was a kid, learning all about stock car racing.

“Even as a young kid, he would not just let you hang out,” reminisced Harvey.  “He taught me how to weld and to work on a motor.  He let me do some of my early sign painting – touchup work.  I wanted to quit school and he told me, ‘a smart mechanic is a good mechanic.’”

***Photos by Johnnie Salamon, Bud Norman and Stan Kalwasinski give a glimpse of Paul Bauer’s racing career.  Thanks to announcer Wayne Adams for supplying most of this information about Paul’ speed exploits at Raceway Park.***