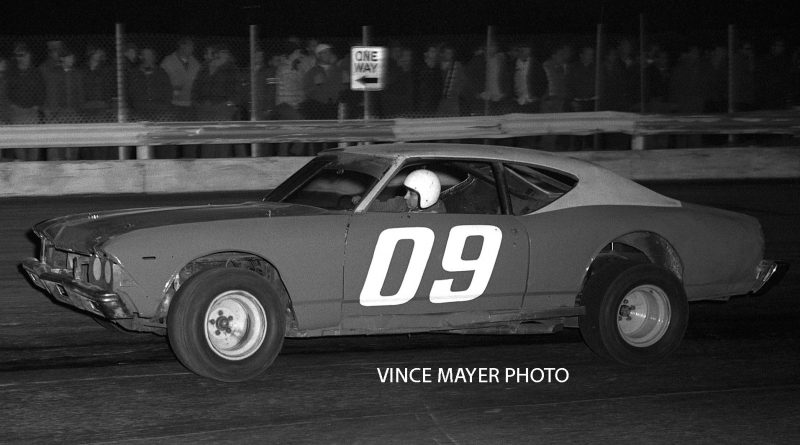 Born in Blue Island, Hernandez began racing at Blue Island’s Raceway Park in 1963, using the cartoon character name.  In 1965, he won one feature and five heat races in the track’s amateur/claiming division.

He became a late model division competitor the following year (1966), driving a blue ’65 Chevelle No. 3.  In 1967, Hernandez captured a couple of heat race wins in late model action at the “World’s Busiest Track” still driving his trusty ’65 Chevelle which was now numbered “09”.

Hernandez was a late model heat race winner at Raceway Park every year from 1967 through 1974, winning as many as nine heat races in 1972 and 1973.  He finished 11th in the late model standings at Raceway Park in 1973 – his best points performance at the tight, quarter-mile, paved oval.

In May of 1974, Hernandez finished second to 11-time Raceway champion Bud Koehler in a 30-lap feature race with the legendary racer Dick Trickle trailing Hernandez at the checkered flag.  His feat that night became a great trivia question – Who finished behind feature winner Bud Koehler and ahead of Dick Trickle the night Trickle showed up at Raceway Park unexpectedly in 1974?

Hernandez enjoyed a special moment in his racing career when he won his one and only late model feature race at Raceway Park early during the 1971 season – Sunday night, May 16th, to be exact.

Raceway Park announcer and writer for the old Illustrated Speedway News newspaper, Wayne Adams wrote in the next week’s issue of the paper…

“Speedy Gonzales of Blue Island is an excellent example of what it takes to become a successful race driver – he has ambition, desire, courage, skill, daring and above all he never learned the meaning of the word – quit.  Tonight at Raceway Park, Speedy Gonzales achieved of one he greatest thrills of his lifetime as he drove his 1969 Chevelle “409” No. 09 to a feature victory in the rugged late model division – the first such win in his eight-year driving career.

“During the past eight years, Gonzales has suffered some severe setbacks – the type that would make an ordinary person give up in disgust, but not Gonzales.  Many times during that period since 1963, he has dragged home a shattered hunk of metal that used to be a racing car.  He had numerous narrow escapes and has wound up in the hospital with rather severe injuries.  But Speedy kept coming back for more and tonight he was rewarded with the feature checkered flag in the roughest short track stock car action in the entire Midwest.”

For a time, Hernandez drove for Dennis Kwiatkowski and Art Corradino.  Hernandez dubbed his young car owners the “Fernando Brothers” – a “tag” that stuck to Denny and Art for many years. He seldom traveled away from his home track – Raceway Park, but did compete at other area short tracks – even on the dirt at Santa Fe Speedway.

Retiring as a race car driver in the mid 1970s, Hernandez began fielding quarter-midgets for his two sons, Marks II and Peter.  Speedy’s team, including his wife Theresa, would travel all over the Midwest to compete.  When the boys got older, both competed in local stock car action.  Peter Hernandez, nicknamed “Little Speedy”, would begin competing in Mid American Stock Car Series action, traveling to various tracks in the Midwest and winning the series title in 2004.

With this driving days behind him, Marks Hernandez also served as a member on several local race teams, including helping Tom Jones in American Speed Association competition.  He also fielded a late model car for several drivers including area champion Mike White, who won late model feature races in 1990. 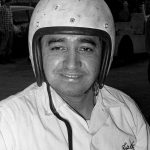 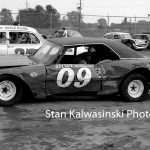 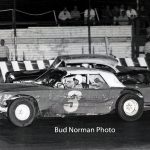 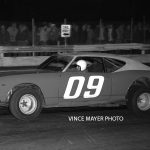