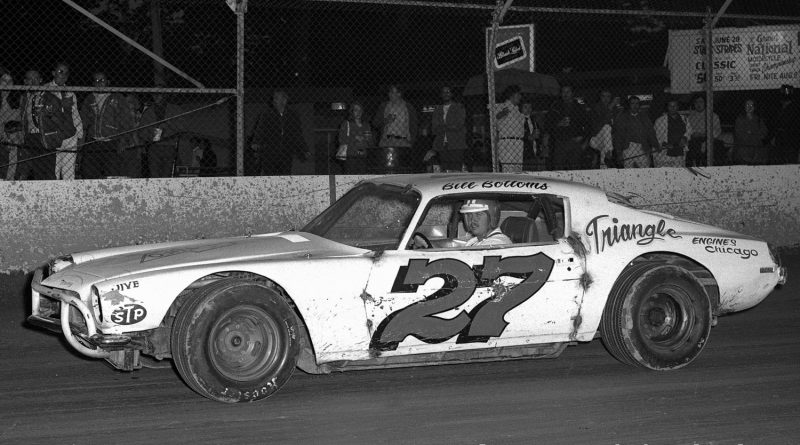 A successful businessman in the tow truck and heavy specialty truck industry, former Santa Fe Speedway racer Bill Bottoms passed away at his home in Niles. Mich., on Friday, December 7, at the age of 77.

Born in Tennessee and serving in the U.S. Air Force, Bottoms competed on the dirt at Santa Fe, beginning in the late 1960s in the track’s sportsman division.  He was listed in the Santa Fe program in 1968 as driving a 1957 Chevy and was named “Sportsman Rookie of the Year” for the ’68 season, finishing seventh in the points.  Bottoms nailed down sixth in the sportsman standings the following year.  By 1970, Bottoms was a late model competitor, racing against the likes of Dick Nelson, Bill Van Allen, Jim O’Connor, Arnie Gardner, Bob Kelly, Tony Izzo and others.  He claimed an early late model feature win, wheeling his 1969 Chevelle to victory in the 25-lap headliner on August 2, 1970.  He would wind up 17th in Santa Fe’s final late model points that year.

Bottoms was the 10th ranking driver in the late model ranks at Santa Fe in both 1972 and 1973, setting up for his best year ever at “The Track of Clay.”  Racing out of Bridgeview, Ill., Bottoms would win six feature races at Santa Fe in 1974 and finish sixth in the final points standings.  A 1973 Camaro No. 27 was Bottom’s ride for his best season at Santa Fe with a great run in the track’s season-ending National Clay Track Championship 200 on September 29.

Tony Izzo would win the “200” on the Santa Fe half-mile that year, but Bottoms was a strong contender in the race, leading the contest on the half-mile dirt oval as the laps wound down.

Santa Fe track announcer Jan Gabriel wrote in the October 3rd issue of Midwest Racing News, “Bottoms made it a three-car battle (with Izzo and Al Johnson) for the lead as the race reached its midpoint.  Bottoms grabbed second from Johnson one lap after the restart (after a mandatory pit stop at 100 laps) and moved ahead of (leader) Izzo as the pair exited turn two on the 104th circuit.  The two pulled away from the rest of the pack and from lap 158 on began running in superspeedway drafting formation with Bottoms in the lead.

“Bottoms held off Izzo’s bids to slingshot into first place until laps 181.  Then as they came out of turn three, Izzo, who was running without brakes, got deep in the corner and tagged Bottoms in the left rear quarter panel.  Bottoms spun into the infield and Izzo came to a virtual halt to give Bottoms a chance to recover.  However, Bottoms required assistance to restart his mount and when the green (flag) reappeared; he found himself one lap off the pace.”

Turning in a strong performance that afternoon, Bottoms would be credited with a fifth place finish behind Izzo, Jim O’Connor, Bob Kelly and Johnson.

Bottoms ended up ninth in the final Santa Fe late model standings in 1975 as he began concentrating more on his business.  Relocating his business to northern Indiana, Bottoms would still compete in dirt late models, being among the entries for Santa Fe’s 200 lapper as late as 1986.