The feature race makeup date will be either July 8 or 9 depending whether Saturday night’s Hell Tour event at the Dirt Oval Route 66 Raceway in Joliet is completed.

Qualifying, heat races and a the “B” feature were in the books when heavy rains hit the speedway.  Three-time Summer Nationals champion Bobby Pierce of Oakwood, Ill., paced a field of 34 entries with a lap of 14.593 seconds around the Sycamore oval to earn fast time honors.

Heat races were won by Brandon Sheppard, Ryan Unzicker, Charlie Olson and three-time Hell Tour champion Dennis Erb Jr.  Shannon Babb, who has won four Summer National crowns in his career, won the “B” main, which, along with provisionals, set the 22-car feature field.  One of the provisional starting spots went to two-time Summer Nationals titlist Brian Shirley, who won Thursday’s Hell Tour opener at Kankakee County Speedway.  Shirley, the 2018 Nationals champ, was leading the third 10-lap heat race of the night when he got into the loose stuff in turn three with few laps to go. 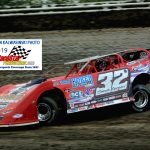 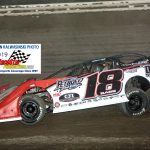