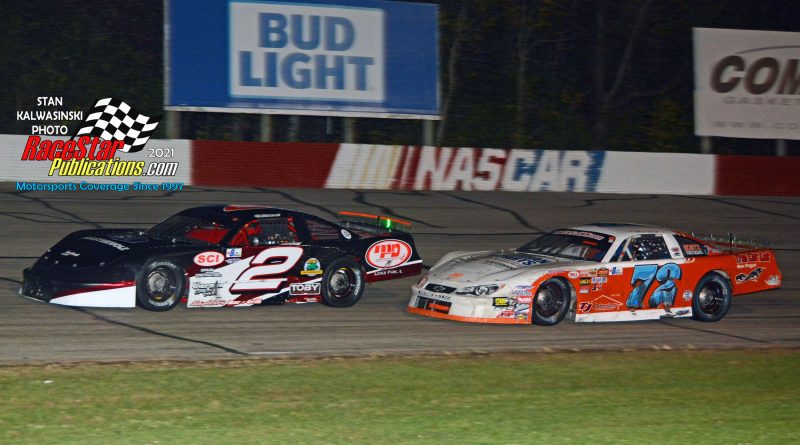 Goede, from Carver, Minn., drove his Chevrolet to victory in the 38-lap Big 8 Late Model Series feature race.  In a race peppered by yellow flags, Goede drove by Michael Bilderback for the lead and raced to victory with a 0.972-second margin over Zack Riddle.  Fast qualifier Matt Henderson, Bilderback and Michael Beamish rounded out the top five.

By virtue of this eighth-place finish, Jon Reynolds Jr. was crowned the year’s Big 8 Late Model champion, the second of his career.

“The cautions definitely helped bunch things up,” said Goede after his win.  “After the restarts, I was able to go real good for a few laps.  I passed him (Bilderback) once and then the yellow (flag) came out and I had to do it again.  It was good clean racing with him.  We had a really good car but Zack (Riddle) was really coming there at the end.  We were trying to save a little bit in case another yellow came.

“It (the win) made up for some of the rough stuff that happened this weekend.  I wrote the wall through turns one and two on Friday during qualifying.  They only had the main, main groove dry (after the rain).  I bottomed the chassis a bit and knocked myself up a half of groove.  We had a lot of work to do to repair it.”

Vandermeir Jr., from Sheridan, Ill., was the winner of the 25-lap Mid-Am Racing Series feature race.  Vandermeir wheeled his Chevy to the win, picking up his fourth career Mid-Am championship.  Battling with Tytus Helgestad for the lead, Vandermeir, the division’s fastest qualifier, finally worked his way into the top spot and finished ahead of Helgestad with 0.402-second victory margin.

“We kept tweaking on the car from yesterday,” said Vandermeir.  “We unloaded here with a pretty good piece.  The car was good in qualifying and we worked on it after the heat race.  We knew we had to make some changes to run fast laps consistently.  The double-file restarts after the cautions helped us.”

Phil Malouf claimed top honors in in the 20-lap headliner for Midwest Dash Series competitors.  Malouf, from Manitowish Waters, Wis., drove his Mustang to the win over Scott Ciesielski and George Sparkman, who blew the engine as the checkered flag waved.  Malouf was crowned the Midwest Dash Series champion.

Earlier in the day while qualifying for Sunday’s ARCA Midwest Tour Oktoberfest 200, Ty Majeski set a new track record as he circled around the five-eighths-mile paved oval in 18.476 seconds (106.192 mph), breaking Dan Fredrickson’s mark of 18.508 which was set on October 8, 2016.  34 cars took qualifying runs for Sunday’s race. 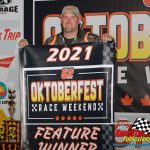 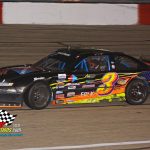 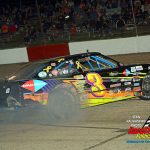 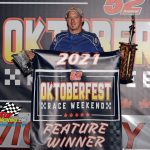 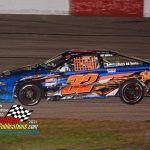 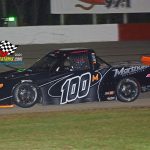 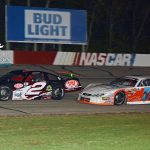 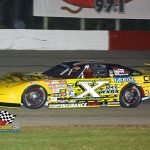 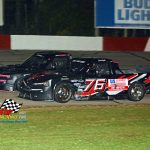 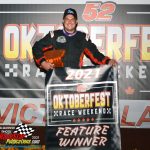 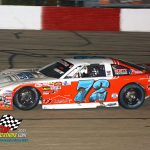 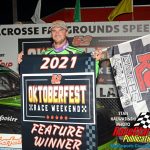 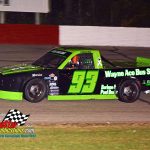 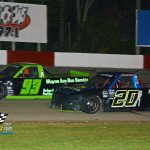