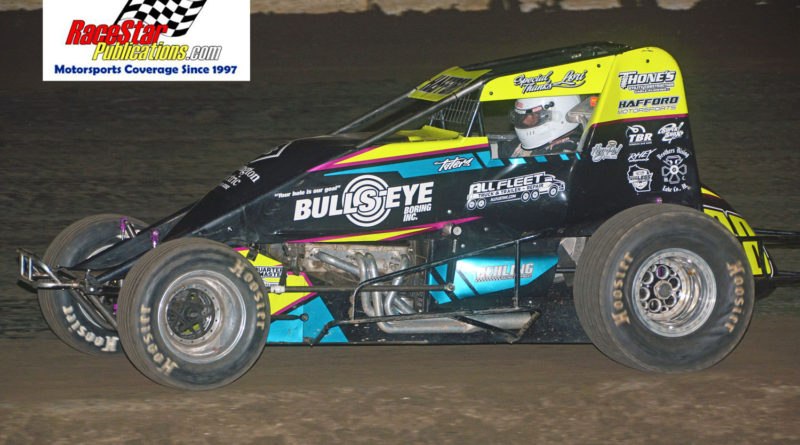 LaSalle, Ill., September 23—Leading from flag to flag, Parker Price-Miller was the winner of the 30-lap Bill Waite Jr. Memorial Classic for the Bumper to Bumper IRA Outlaw Sprints at LaSalle Speedway Sunday night.  The competition was co-sanctioned by the Midwest Open Wheel Association and presented by Interstate Batteries of Central Illinois.  Over 100 cars in three divisions were in the pits for the evening’s action.

Price-Miller, the 20-year-old racer from Kokomo, Ind., lined up on the inside front row of the 24-car starting field and never looked back once the green flag flew as he scored his first IRA feature win of the season in his Bernie Stuebgen-owned/Indy Race Parts-sponsored No. 71p sprinter.

“Bernie (Stuebgen) gave me a great race car,” said Price-Miller after his victory.  “The only one I was worried about was my teammate, Gio.  We had such good race cars and it was up to us to race through the field.  I know Gio is a very good driver and I respect him.  There was respect there racing with him.  He slid me a few times but I held on for the win.”

The race was red flagged with seven laps complete when fastest qualifier Kerry Madsen got tangled up and spun around at the end of the back straightaway.  With Madsen’s racer in the path off oncoming cars, Mike Reinke tagged the outside wall, sending Reinke on a tumbling ride.  No one was injured in the incident.

Brian Shirley of Chatham, Ill., was the winner of the super late model stock car portion of the program as he captured the $5,000-to-win, 40-lap feature race.  Starting on the inside of the front row of the 20-car field, the 37-year-old Shirley led the contest from start to finish in his Bob Cullen Racing/Thomason Express/Rocket Chassis No. 3s, taking the checkered flag in front of Chris Simpson.  Billy Drake finished third with Allan Weisser taking fourth.  Jason Feger and Rich Bell rounded out the top six.

“(Lapped) traffic was the biggest key tonight,” said Shirley.  “We needed to get by (the slower cars) as fast as we could.  You had to bide your time with the lapped cars.  There were a couple of them out there that were tough to get by.  The track was pretty racy and we did what we had to do to get around them.”

Allen Hafford claimed top honors in the 20-lap Wisconsin Wingless Sprint Series feature race.  Hafford, from Beach Park, Ill., finished ahead of Craig Campton, Mitchell Davis and Jordan Mattson, who used the high, outside groove to advance from towards the back of the 22-car field.  Rod Colburn and series points leader Tim Cox rounded out the top six.