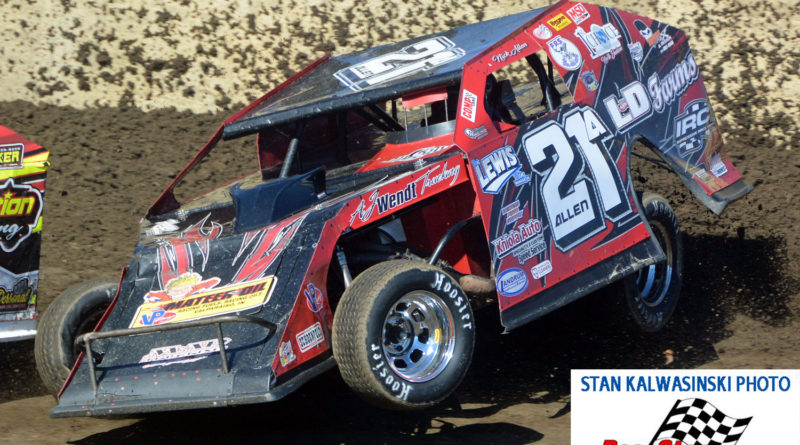 With over 180 cars in the pits Sunday after some 230-plus registered Saturday, Greg Johnson (late models) and Nick Allen (modifieds) were feature winners in their respective divisions at the quarter-mile dirt track.

A field of 20 started the 25-lap late model main event with Johnson, the 51-year-old racer from Bedford, chasing leader Rich Bell until Johnson and Bell got together between turns one and two for a moment with Johnson and his Weinle Motorsports No. 17 shooting into the lead and never looking  back.  One yellow flag slowed the action with Johnson, a former crewmember for Steve Kinser’s sprint car effort, having a 1.314-second lead over Rusty Schlenk at the checkered flag.  Bell, David Hilliker, JR Hotovy and Chad Stapleton rounded out the top six in a race that saw 20 cars start.

“The track locked down rubber and I saw it coming real quick,” said Johnson, a veteran of 23 years who just got back into racing three months ago.  “I got by him (Bell) and set my pace.  Those lapped cars got pretty hairy.”

Allen, from Wheatfield, was the winner of the 25-lap modified headliner, winning for the first time in 2018.  Scoring his third career Klash victory, the 35-year-old speedster wheeled his Dan Lewis & Son/L&D Farms No. 21 to the victory, leading from flag to flag.  Allen had a 0.580-second lead at the checkered flag over a persistent Kevin DeYoung.  Dylan Woodling, Kyle Cooper, Ian Keller and Mike Vandermark completed the top six in the 22-car field.

“I was just trying to stay in the rubber pretty much and not tear the tires up,” Allen said after his win.  “He (DeYoung) was putting the pressure on there at the end.  I drove it in too hard once and I saw him under me.  I was trying not to make any mistakes and we held him off.”