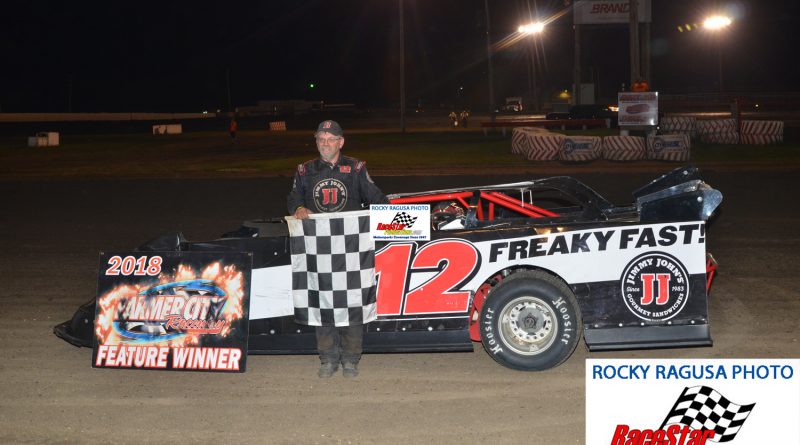 After 37 years of winning championships and over 325 feature wins to his credit, Gibson City’s Kevin Weaver got an unexpected phone call in late October. Representatives with the Dirt Late Model Hall of Fame in Union, Kentucky called to welcome the driver known as the “Flatland Flash” as a 2019 inductee.

“I was excited when I got the news, but also I felt a little depressed,” Weaver said. “Racing is all that I have ever done in my life and I know it is slowly coming to an end.”

Weaver will join Illini drivers like Roger Long (Fithian), Bob Pierce (Oakwood), Tony Izzo Sr. (Bridgeview), and Don Bohlander (Peoria); along with names like Jeff Purvis, Jack Boggs, Scott Bloomquist, and Donnie Moran. Joining Weaver into the 2019 ceremony will also be Streator’s John Provenzano. “I have driven against a lot of those guys, “recalls Weaver. “ When I was little I can remember going to watch Jeff Purvis race in Florida. I am so humbled to even be mentioned with the group of drivers that are enshrined.”

A successful 2018 season saw Weaver carry the checkered flag seven times, plus add another Farmer City Raceway and Fairbury American Legion Speedway track championship. At the age of 55, Weaver hopes to continue racing at the area tracks and travel to several of national races. “I want to continue as long as the finances hold up and as long as I feel I can win races, but I don’t see myself racing past 60 years old,” Weaver said. “I never had an open check book in my career. People like Dick Turner, Pizza Hut, and Jimmy Johns have all been a big part to my success.”

Race teams have to constantly adapt to the new technology in the sport or they are left behind. With the new products and technology, it increases the cost for the racer. “Racing is a challenging sport,” commented Weaver. “There are a lot of things that play into being a good racer. You have to be able to manage your money, go where you think you can drive and win. I attribute to my racing all these years by making the right decisions.”

“I have to thank my wife and kids for the support they have given in allowing me to do something that I enjoy. I couldn’t have done it alone, but a lot of guys helped me during the course of my career and it would be hard to remember them all. I have raced all over and have met many great fans. I always tried to race everyone as clean as possible and have respect for my fellow drivers. When you are going 80 mph on a dirt track and sliding sideways, you are going to bang and make mistakes. I just want to be remembered as a driver that didn’t cause many problems and was willing to help anyone out.”

Held in high regard by his fellow competitors and a popular figure among the race fans, Weaver’s induction will take place next August 8-10 during the Lucas Oil Late Model Series, North/South 100 weekend at the Florence Speedway in Union, Kentucky. Race fans that would like to support Weaver in 2019, a race party is scheduled for March 16.