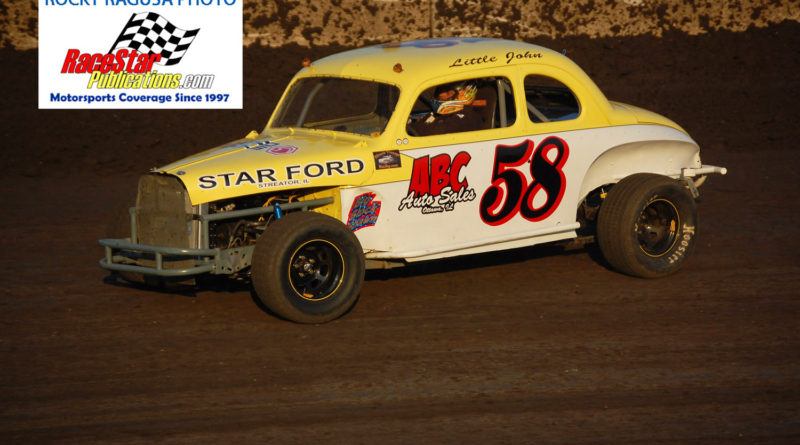 The world renowned late, Bob Tattersall was elected to the National Midget Auto Racing Hall of Fame in 1984 and was inducted into the USAC Hall of Fame in 2016. Known for his exploits behind the wheel of a Midget, Tattersall claimed 63 USAC Midget wins and was a popular figure in New Zealand and Australia where he was accounted for winning over 50% of his races.

The late, “Dirt track” Jack Tyne was inducted into the Mazon Speed Bowl Hall of Fame in 2005 and was made a member of the Illinois Stock Car Hall of Fame in 2013. Tyne was a multi time track champion at the Fairbury American Legion Speedway and accounted for numerous feature wins thru out the Mid-West.

In late October, another Streatorite got the long awaited phone call for his introduction into the National Dirt Late Model Hall of Fame. A Chicagoland favorite, “Lil” John Provenzano has accounted for over 550 feature wins in a career dating back to 1971. With five National Clay Track Championships at the historical Santa Fe Speedway, a Kevin Roderick Memorial win at LaSalle Speedway, and ranking third in feature wins at Kankakee Speedway, Provenzano will join an exclusive group at the Florence Speedway in Kentucky next August.

“I actually teared up a little”, Provenzano said when he received the news. “For all the years that I have been involved in racing, it makes me feel good that somebody was paying attention to what I have done.”

Provenzano will join fellow Illini drivers like Roger Long, Tony Izzo, and Bob Pierce, plus Scott Bloomquist, John Gill and Jimmy Mars into the hall. “It is a real honor,” said Provenzano. “A lot of the guys in there, I have raced with. They were all at the top of the game. During the 70’s and 80’s when we would race against them, they were so much further ahead of us as far as equipment and technology.”

Although failing to make the race, Provenzano was able to fulfill a dream this past July by competing at Eldora Speedway in the NASCAR Camping World Truck Series event. “When NASCAR first started the truck series, my dad saw an ad in the racing papers. NASCAR was looking for drivers to tryout the trucks. Dad sent my name in to go test them out. I thought to myself, nobody is going to want to watch trucks race. I wasn’t interested. Well that was the wrong thing to do, because the truck series is going strong today. When I got the chance to race at Eldora this year, I had to go. Bob Pierce was a big help to our team, but we had a lot of other problems.”

With 10 track championships under his belt, fans question why a man that has raced as long as Provenzano would only have a small amount. “I never cared about racing for track championships. No question about it, they are nice to have. I didn’t care for the pressure that came with running for a title. A driver tends to do things different when they are racing. I even had a shot at winning a UMP Summer National title, but we went to a different track where the money was. I was about racing to win and make money.”

“First and foremost I have to thank my wife and kids for their support,” Provenzano spoke. “They allowed me to go race and all are diehard racers. All of my kids have raced and done pretty good too. Racing has been a big part of our lives. I missed going to family weddings and birthdays because I was racing. For what it is worth, I want to apologize to them.”

A shoestring racer, some of Provenzano’s best years were during the 1980’s driving the Dependable Carburetor entry of Lee and Dottie Byers. “Even with Lee and Dottie, I had a set budget we had to race with, but we won a lot of races together. I have no regrets for how I did my racing and would do it all the same way over if I had to. A lot of people all they do in their lives is work, work, work, and then pass away. They didn’t do anything in their lives. At least I did this.”

At the age of 63, Provenzano has no plans to slow down. Winning two features this year at the Sycamore Speedway, Provenzano has plans to run eight- ten races for 2019. “I have cut back, but still get to Sycamore and LaSalle when they run our class.”

“In closing, I have to thank all my fans for their support in getting me into the hall. Of course, I share this honor with the people that have helped thru out the years, from my sponsors to the crew members. They all made things a lot easier and more importantly, we made a lot of memories.”