High Atop the Rock by: Rocky Ragusa
September 12, 2019 Gary Gasper

A natural behind the wheel of a racecar, Peoria’s Allen Weisser has piled up numerous championships and feature wins since he began his racing career in 2008. Claiming the track championship in his Modified at Farmer City and Fairbury, Weisser has hopes to add the UMP National Modified title to his resume as he trails point leader, Nick Hoffman by 25 marks, as the point season winds down on September 30.

Following in the path of his father, Butch, a stand out driver in his own right, Weisser began racing at the Spoon River Speedway in 2008. Winning the E-Modified title, Weisser moved into a UMP Modified the following year. Weisser picked up his first ever Modified feature win at Spoon River in dramatic fashion. Starting 24th, Weisser made his way to the front, to win the $3000 to win, Falls National. Winning four straight track championships at Spoon River, Weisser began to branch out to many of the area tracks. Other highlights include winning two straight 100 lap Modified races at Peoria Speedway and a remarkable streak of finishing in the top ten in national point since 2013. In 2017, Weisser spilt his time in his Modified and ran a Pro Late Model, in which he was crowned the DIRT car UMP National champion.

Weisser and his team began this year during the Florida Speed weeks with his Modified. Working with a new Lethal chassis, proved to be a learning curve for the team.

“We had a couple of decent runs, but we hadn’t really figured out the car,” said Weisser.

Making their way to Clarksville, TN. For the annual Toliet Bowl race, Weisser took the win on the first night. On the second night, Weisser was able to finish second to Tyler Nicely.

“That is when I felt we had a good car and could do something this year,” Weisser said.

An infrequent competitor to Farmer City and Fairbury in the past, Weisser was a frequent visitor to victory lane where he posted 13 Modified wins at Fairbury and seven at Farmer City. Pulling double duty, the 2018 UMP National Rookie of the Year in the Late Model, Weisser scored three feature wins.

“We have really enjoyed racing at both tracks,” spoke Weisser. “There has been plenty of good competition. In the past, we only raced at Fairbury a couple of times, but I really have enjoyed everything that Fairbury offers.”

With only 8 failed to finishes in 64 Modified races this year, Weisser is attentive to his maintenance program.

“Every day is a maintenance day,” Weisser spoke. “We go thru the car every week. I can say that I am quite proud of our performance record with both cars.”

With the national point race ending this month and Nick Hoffman making a late season run to take the lead, Weisser will have his work cut out for him, in quest of the championship.

“We will have to keep winning races and hopefully get some bonus points,” closed Weisser. “It is going to be tough to beat Hoffman and Nicely. Regardless of what does play out, it has been a heck of a year for our team.”

Kankakee County Speedway Scouts, First Responders, Fire, Police, and Military personal will be admitted for free this Friday night. A full show, plus Quads will be in action on the high banked dirt oval. Racing will start at 7:30. Cullom’s Torin Mettile (Pro Late Model), Nick Clubb (Modified), and Zach Zuberbrier (Street Stock) are among the track point leaders.

Sycamore Speedway The final Friday night show will consist of Spectator, Powder Puff, 6-Cylinders, Compacts, Figure 8, and a Demo Derby, beginning at 8. Saturday will feature twin 25’s for the Super Late Models, plus Street Stocks, Pure Stocks, Lightning Sprints, and the UMP Late Models. Racing will start at 6:30. Mike Spatola was the winner of the $3000 to win UMP Late Model race last week with Ryan Unzicker in second.

Fairbury Speedway Racing will return on September 21 with the DIRT car Roundup. Among the classes making their first ever appearance will be the American Ethanol Modified series and the Pro Modified class. The speedway will introduce the top ten in each of the four weekly divisions and the Alkota “Keep it Clean” series winner and runner-up.

Grundy County Speedway Six time track champion and the winningest driver in the history of the 1/3 mile paved track, Eddie Hoffman will have his hands full this Saturday night. With $5800 going to the winner of the 58th Annual Bettenhausen 100, the race is attracting many of the region’s top pavement drivers. Street Stocks and Pure Stock will also be part of the night’s festivities. Gates open at 4:30, with time trials set for 5:30, and racing at 7.

Peoria Speedway Mike Chasteen Jr., the winner of 12 Modified and 8 Late Model features will look to pad his point lead and wallet as $2500 will go to the race winner in the Modified and Late Model races on Saturday. Crate Modified and Hornets will also take part. Hot laps at 6 and racing at 6:30.

Spoon River Speedway After rain cancelled the remainder of last Saturday’s car, Modified teams will have double features this Saturday, plus a regular weekly show. Practice starts at 6 and racing at 7.

Macon Speedway The POWRi National Midget series will be the feature class this Saturday night. Street Stocks and the Pro Modified will also take part in the program. The night will begin with hot laps at 6 and the green flag waves at 7.

Bohmer’s Rt. 66 Raceway Kart racing returns this Sunday afternoon. Gates open at 10, with practice at noon, and racing at 1.

Eldora Speedway Taking the lead for the final time on lap 67, Jonathan Davenport, in his Brewster Baker paint scheme, was able to win the 49th annual World 100 at Rossburg, Ohio for the third time in five year. Driving the final 70 laps without power steering, Davenport was able to pick up a check for $52,000. 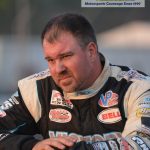 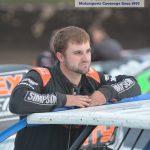