High Atop the Rock by: Rocky Ragusa
October 15, 2020 Gary Gasper

Being loyal to the Fairbury Speedway paid off big dividends for Michael Schomas in the DIRTcar Stock Car division. The Ottawa native was able to capture the 2020 Stock Car championship with consistent top ten finishes and perfect attendance.

Schomas started racing a BMX bike at the age of nine. His father bought a kart and raced at the local tracks until his mother became sick.

“ We had to stop racing and take care of my mom,” Schomas said. “ I got back into racing in the 90’s and raced until I got hurt in 1997. Seven years ago I got a Street Stock and have been at it since”.

In winning his first ever track title, Schomas is still looking for his first career feature win. The #F5 has numerous heat race wins and has been the bridesmaid on several occasions.

“ The season has been rough on everyone”, Schomas spoke. “ I give the staff at Fairbury alot of credit for getting the shows going for us and the fans”,

Schomas joins a list of former Stock Car champions like Rick Thomas, Joel and Andrew Funk, Luke Gash, and AJ Meiferdt who all went on to win the DIRTcar national championship.

“ It is a real honor to win the championship here”, Schomas said. “ I have been coming here since I was a kid. With all the past champions the track has produced it is really special”.

Schomas is supported in his racing by loyal sponsors and long time crew members, Denise Mayer and Jeff Schinzel. A trademark on their race car that Schomas has carried since he began his racing career, is a American flag.

“ I dedicate each year to all the military veterans, past and present. They all make it possible for all that we do,” closed Schomas. “ Besides Denise and Jeff, I have to give a big thanks to Al Gray. We race against each other and do all that we can to help each other out”.

Plans for the 2021 racing year will have Schomas set to defend his track championship.

“ It was a short season, but it was special,” added Schomas. “ I hope I can live up to being a Fairbury track champion”.

Tri-City Speedway located in Granite City, a Friday- Saturday program will be held with the Lucas Oil MLRA Late Model series in attendance. Fans can expect to see MLRA regulars like Jeremiah Hurst, Payton Looney, Chad Simpson, Tony Jackson Jr,, and Garrett Albertson taking on area favorites Daryn Klein, Gordy Gundaker, Michael Kloos, and Mark Voigt. $5000 will go to Friday’s winner and $7000 will go to the race winner on Saturday. DIRTcar Modifieds will race for $2000 to win each night and the B-Mods will be on the card Saturday. Hot laps will start at 6:30 on Friday and 5:30 for Saturday.

Rockford Speedway The 29th Annual Bahama Brackets take place on Saturday and Sunday. Time trials and heat races will be held on Saturday at 6:00 and racing starts at noon on Sunday.

Kokomo Speedway Many of the area drivers are expected to be on hand for this weekends Kokomo Klash. Friday will feature Non-Wing Sprint Cars, Wing Sprint Cars, Midgets, and Thunder Cars. Hot laps begin at 6 and racing will follow. Late Models, Modified, Sportsman, Stock Cars, and Hornets are on tap Saturday will practice at 4 and racing at 5.

Illinois State Fairgrounds The 59th Annual Bettenhausen 100 for the USAC Silver Crown series is scheduled for Sunday. The hottest driver in the open wheel ranks, Kyle Larson will be in attendance looking to add the prestigious trophy to his resume. Gates will open at 11, practice at noon, qualifying starts at 1:15, with a last chance race, and the 100 lap feature to follow.

Bohmer’s Rt. 66 Raceway The Kart track will conclude their season on Sunday with gates opening at 10:30, practice at noon, and racing will follow. Full concessions are on the premises and spectators are admitted for free. 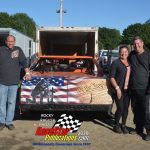