High Atop the Rock by: Rocky Ragusa
October 10, 2019 Gary Gasper

The Fairbury Speedway will conclude their 2019 racing season this Friday and Saturday night with the FALS Frenzy. Originally scheduled in May, the race was rained out. Promoter, Matt Curl saw an opportunity showcase “America’s Dirt Track”, to race teams and fans with the late season event. Two nights of Late Model, Modified, and Pro Late Models on the 1/3 mile, dirt oval has drawn interest from race teams looking to take the big check.

Fresh off a $7000 to win race at the Shady Hills Speedway in Indiana, Mike McKinney looms as the favorite in the Modified class. Track champion, with 26 feature wins Allen Weisser and McKinney have battled all season for top honors and this weekend will be no exception. A weekend off from the NASCAR Xfinity Series, Riverton’s Justin Allgaier has the race on his schedule, plus Jeffrey and Michael Ledford, Steven Brooks, and Jeff Leka.

The Pro Late Model division has made two appearance’s to Fairbury this year and Dakota Ewing has been the bridesmaid on both occasions. The man to beat at Farmer City and Macon Speedway, Ewing would love to add some Fairbury hardware to his mattle. In his lone trip to Fairbury, DIRT car Pro Late Model National Champion, Aaron Heck took one of his 22 feature wins with Ewing on his trail. A large field is expected with Torin Mettile, Trevor Gundaker, Matt Hammond, Mitch Hahn, and Amber Crouch looking to take the payday. 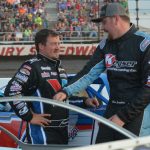 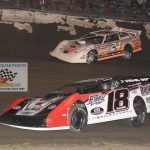 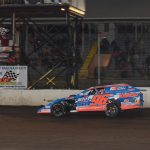