High Atop the Rock by: Rocky Ragusa
November 3, 2020 Gary Gasper

Many families use the sport of Kart Racing to introduce their son or daughter to motorsports. Some are able to advance to Stock Cars, Midgets, or any form of auto racing. Dustin Heath has been able to turn his Kart Racing into a career.

Originally from Ohio, Heath’s father Tony raced Street Stock on the area dirt tracks. A neighbor raced Karts and the young Heath, along with his father went to check out the open wheel action. Dustin was able to convince his father into buying a kart and Heath at the age of nine, began a remarkable hobby into a profession.

Now a resident of Morris, Heath has been racing for 22 years, with over 400 career feature wins. Accomplished on the dirt tracks, Heath has gained national attention for his savvy on the indoor circuit.

Among his highlighted indoor wins, include being a two time winner of the King of the Concrete held in Greensboro,N.C., winner of events in Fort Wayne, Columbus, Ohio, Springfield, Ill., and South Dakota.

“ The King of the Concrete race is my favorite”, said Heath. “ It is a good paying race that attracts racers from all over. People ask me why I do so well on the indoor tracks, I feel that is because I am short and it plays to my advantage”.

Outdoor wins on the dirt tracks include the prestigious Hillbilly Hustle that was held at the Lake Village Speedway in Indiana which paid $1000 to the winner. Heath's biggest payday was also a dirt race in Missouri. Heath took home a check for $5000 in winning a Burris Tire race.

In his shop where rows and rows of trophies and checks line the walls, Heath estimates he has won over $62,000 .

“ Kart Racing has always been natural for me,”Heath spoke. “ My strategy is to pick and choose my battles, when to strike, and when to ride. I just feel out the competition and the track”.

“ I have to thank my wife for allowing me to continue racing and traveling all over. I get a lot of help at the shop and at the racetracks. X-Caliber Engines has been a big part of my racing program and have carried me to a lot of my wins. I owe you all my gratitude and thanks. All of you make my race days easier”.

The 31 year old Heath is gearing up for the biggest indoor Kart racing event in the country, held in Batesville, Arkansas. A two day special held on November 27-28, the winners of each of the four featured races will receive a check for $3000 for each day. Heath will be joined by a former Route 66 Raceway track champion, Shawn O’ Neil of Peoria. 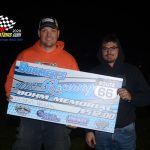