High Atop the Rock by: Rocky Ragusa
November 25, 2022 Gary Gasper

The Gateway Nationals held at the Dome of America’s Center in St. Louis has become one last gathering of the year for race teams and fans across the country. Held December 1-3 over 140 Late Model teams have registered and 60 Modified drivers have been invited to compete on the ⅕ mile semi banked dirt oval. Fairbury’s Alan Stipp was chosen to compete in the Modified portion of the 6th annual race and will be making his first ever appearance at the indoor spectacular.

The 35 year old had his best racing year to date. Stipp finished second in the point standings at Fairbury. Racing at partial schedule at Farmer City where he placed sixth, and fifth in the DIRTcar North Region.

Beginning the 2022 campaign, Stipp was behind the wheel of a MBR (Mark Bush chassis) before a wreck at the Kankakee County Speedway destroyed the car. Facing the dilemma of not being able to finish the year, Stipp turned to fellow racer, Trevor Neville.

“ Trevor had an Elite chassis he was wanting to sell,” Stipp said. “ I was running second in Fairbury’s points and I would have hated to not be able to race. The Elite fits my driving style. I like racing the bottom and middle of the track. My only problem has been qualifying. I end up having to dig myself out of a hole come feature time, but somehow we are up there at the end. I can’t say anything bad about the MBR car, it’s just that I had to switch in the middle of the season. The Elite has been a good fit.”

Racing off and on for 20 years, Stipp feels like he has finally gotten the equipment and team to compete.

“ From my wife, son, my crew, and sponsors, this is the best support that I have ever had. Everything is working well for us. I feel like I could race another 20 years,” Stipp laughed.

One of Stipp’s sponsors has been part of his program since his days of racing in the Sportsman class, is journeyman racer and Hall of Famer, Kevin Weaver. Weaver has been responsible for the speed on the track, where he builds his engines ang serves as Stipp’s mentor.

“ Kevin will tell you what he thinks,” Stipp spoke. “ He has been a great mentor to me and has been a huge part of our team's success. I can talk with him and bounce ideas off of him.”

Stipp can be a hard person to catch up with come race day. He might be busy working on his car or in turn mentoring fellow racer, Caden McWhorter. Stipp’s lessons have paid off for McWhorter. In his this year of Modified racing, McWhorterlooks to have a bright future in racing, would finish fifth at Fairbury, third at Farmer City, and fourth in the North region.

“ I love to help people that respect help and want to take my advice,” said Stipp. “ Caden is going to be really good. He has a good head on his shoulders. The McWhorter family is amazing. They have all become great friends. Respect is earned and Caden has definitely earned mine. He is a good clean driver and will have a great career in racing.”

Stipp has also guided his son, Canon in his racing. In his third year, the eight year old captured the Rookie title at Bohmer’s Rt.66 Raceway.

“ Canon and I are inseparable,”Stipp reflected. “ Ever since he was two, he has always been at the track with me. We have a great bond. I just hope I can stay in racing long enough to where Canon can get in a Modified.”

Stipp will take to the track on December 2. In his group, drivers to watch will include former race winner, Ray Bollinger, his son, Brandon, Mike McKinney, Dave Wietholder, Trevor Neville, and Ethan Dodson. The #88s crew has been hard at work and looks to make some noise in front of a rabid crowd.

“ The crew has been at it every night since we got the news,” Stipp said. “ Jason Martin, Jaxon Martin, Dave Garrett, Chris Hutchcraft, and Jeremy Ray are about excited as I am about the race. I can’t thank them enough, along with my wife, Taylor, son, Canon, and my Mom and Dad. We race on a shoestring budget. It takes every logo on the car, plus what I put into the car that gets us to the track and compete. Zoeller Designs, Cornish Construction, Grosvenor Trucking, Air-Tite Spray Foam, Weaver Racing Supplies, Bowman Race Bodies and Fabrication, KirbyYourCarGuy, Hewitt Farms, Benway Farms, Freedom Rings, Hull Family Tire and Auto, and RLM Enterprises are some of our sponsors that make it all possible.”

It is a once in a lifetime opportunity for a driver and his team that will be front of a capacity crowd and reach fans courtesy of FloRacing.com to be seen in front of thousands of fans. The track will have tight quarter racing and plenty of rubbing. Stipp has the ability and support from his crew, sponsors, family, and friends.

“ If we can make the show, I have time to make something happen,” Stipp closed. 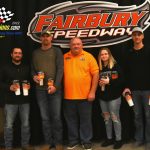 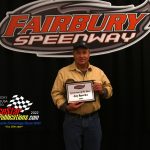 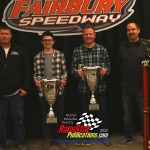 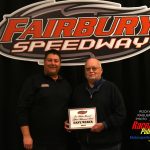 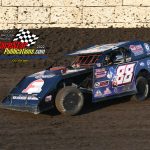 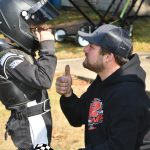 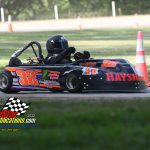