High Atop the Rock by: Rocky Ragusa Upcoming Events
May 29, 2019 Gary Gasper

A popular figure for the last 20 years at the Fairbury Speedway as a track volunteer, crew member, and now driver. A Fairbury native, he has raced in the CR Towing Sportsman class for the last 10 years with limited success. On opening night at the track, Tyler Roth was running in the fifth position with a handful of laps left to go. The top four cars became entangled, blocking the track, and a red flag was displayed.

“When I saw the flag out, I realized I was the race leader,” recalled Roth. “My car was new and all I had planned to do was just shake it down. I told myself, I can’t hold back now. It was go time. When I crossed the finish line, I was ecstatic”.

After Roth had taken the checkered flag, crossed the scales, and did his post-race interview, there was a scene reminiscence to the 1988 Daytona 500 when Dale Earnhardt Sr. took his first 500 win, drivers and crew members greeted Roth with handshakes and high fives as he exited the track.

“The track and the racing community have been like a second family to me,” Roth said.” I have been here a long time and most people know me. Getting the win and everyone congratulating me really met a lot”.

During the past winter months, Roth got together with Jay Ledford, Daniel Flessner, plus other friends and built a new car. All of them are like brothers, loaning parts, giving advice, and just hanging out with each other.

“Jay has been a tremendous help to me on and off the track”, spoke Roth. “Giving me old parts and tires, it really means a lot. Plus, Jay and Chrissy introduced me to the love of my life, Erin Casson.”

“I have known Daniel and his family forever. If it wasn’t for Daniel, I probably wouldn’t be standing here today. We are both volunteer firemen and there was an accident, causing a fire. I got burned and he saved my life. I owe him a lot. Whenever he needs any help on their farm, I always help him out”.

With three races under the books at Fairbury, Roth is currently in fourth trailing point leader, Tommy Duncan by 11 marks. A long way to go until the point season ends, Roth would like to get another feature win and contend for the title.

“I want to get more laps on the car, because it is still new to me,” closed Roth. “ The Sportsman class has some great competition this year. It is like anyone can win. I just need to stay out of trouble and hopefully be in the running for the championship”.

Macon Speedway A Thursday night program will feature the MOWA Sprint Car Series, plus a 100 lap Modified race. Saturday will be a $5 general admission for the race fans with all regular classes on the 1/5 mile dirt track. Hot laps will start at 6 and racing at 7. On Monday, El Paso’s Ryan Unzicker led all 50 laps in claiming his first Late Model win of the year. Unzicker had to hold off Defending UMP Champion, Rusty Schlenk for the $1500 prize. After Peoria was rained out on Monday, Allen Weisser hauled to Macon and turned back Tommy Sheppard Jr. and Ken Schrader for the win.

Kankakee County Speedway Fans will have the chance to meet their favorite drivers on Autograph Night. A regular race program will be offered this Friday. Racing at 7:30.

Lincoln Speedway $1000 will be awarded to the winner of the Hornet race this Friday night. Modified, Pro Modified, Midgets, and the Pro Late Model class will be racing. Hot laps at 6 with racing at 7.

Fairbury Speedway If you have been a longtime supporter of the Fairbury Speedway, dirt track racing, or curious about what goes on at the fairgrounds on a Saturday night, then this is the night were the track shows gratitude to the fans. It will be Fan Appreciation Night with all fans admitted for FREE in the stands. FALS Cup Weekly racing will consist of Late Model, Modified, Street Stock, Sportsman, and the Hobby-Modified classes. Also making their annual appearance will be the Vintage Racing of Illinois Series. Hot laps kick things off at 5:45, qualifying at 6:15, and racing at 7. The following Tuesday, the NOS Energy Drink World of Outlaw Sprint Car Series make returns for a 40 lap, $10,000 to win race. NASCAR driver and recent winner of NASCAR All Star race, Kyle Larson will make an appearance for the race. Fans will have a opportunity to meet one of racings bright stars before all the action at 4:30. Joining the Sprint Cars will be the Modified class in a 25 lap, $1500 to win race. Racing will begin at 7 for this special night of racing.

Peoria Speedway $5 will get you in the stands as the track will try again for their Fan Appreciation Night. A regular weekly program of five classes will battle for honors on the ¼ dirt oval. Hot laps begin at 5:30 with racing to follow. Last week, Mike Chasteen Jr. continued his dominance by taking his fourth win in his Late Model and is undefeated with the Modified by picking up his fifth trophy. 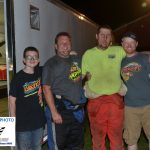