Racing Background -“ I began racing in the Hornet class in 2013. Moved to the Hobby-Modified class in 2018. This will be my first year racing a Sportsman”.

Accomplishments- 8 Hornet feature win and I won the World Championship race one year at Macon Speedway. 7 wins in the Hobby-Modified class at Fairbury

Most memorable racing moment- “ I grew up watching the races at Fairbury. When they started the Hobby-Modified class I knew I had to live my dream of racing at Fairbury. The first feature race I won at FALS, I got pretty emotional that night”.

Who do you look up to and why- “ My father and grandfather were a big part of my life. They both taught me a good work ethic at a young age. I learned you don’t get anywhere without working and you don’t get ahead of anyone unless you work as hard as they do. In racing, I have always admired Kevin Weaver. He’s always willing to help someone out with any assistants or answer a question”.

How did you know racing was for you- “ I always liked fast cars and wanted to try racing”.

Most underrated thing about racing- “ It takes patience and a lot of work to get to the finish. Patience is big and many people don’t have it or the desire to get the work done”.

Most overrated thing about racing- Big engines. It doesn’t take a big engine to win. It’s about how you set your car up and drive it”.

Pit crew- Brian Deavers, Phil Earl, Rod Lusher, Bobby Overman, Betsy Lapham ( She is the crew chief. It doesn’t happen unless it goes thru her)

Farmer City Raceway- The American Modified Series will be featured in a $1500 to win special event. Late Models, Pro Late Models, and Stock Cars will also be racing. Hot laps will start at 6:30. With qualifying at 7, and racing will start at 7:30. Following the passing of his crew chief (Randy Courtney) two months ago, 2019 track champion Donny Wallden picked up his first win of the year. Michael Ledford (Modified), Aaron Heck (Pro Late Model), Ryan Taylor (Stock Cars), and Owen Steinkoenig (Pro-Mods) were also race winners.

Grundy County Speedway It will be Armed Forces NIght with all veterans, past and present admitted for half price. Four divisions will race on the ⅓ mile paved track. Stands open at 5. Time trials at 6:45 and racing at 8. Anthony Danta took the lead with four laps remaining and held off ninth starting Paul Shafer Jr. for the Late Model win. Danta was able to pocket $2100 for the win,including a $1000 bounty on Shafer Jr.

Fairbury Speedway The Stock Car division will take center stage this weekend with the 12th Annual Earl J. Hubert Memorial race, presented by Aftershock Decals and Designs. A 43 lap race, the event will pay $2000 to the race winner. Expected many of the top Stock Car drivers from throughout the region, headlined by Jeremy Nichols who will look to make it three straight. Late Models and Modified classes will have regular race nights. The CR Towing Sportsman class will have a $500 payday to the winner and with Macon Speedway not running on Saturday, fans can expect several of their drivers. The speedway will welcome the Big 10 Pro Late Model class in a $1000 to win special. National point leader, New Berlin’s Jose Parga has been running roughshod over his competition and will be considered a favorite. Gates will open at 3, hot laps at 5:50, and racing at 7. Adult admission is $10 and children 12 and under are free with a paying adult.

Bohmer’s Rt. 66 Raceway Clone 360 and Clone 400 kart racers each have a $250 to win race this weekend, which should attract many from the area. If the driver wins both classes, they will receive a $100 bonus. Champ classes, Juniors, and Mowers will also be on the ⅛ mile dirt track, located between Chenoa and Pontiac on Ole 66. Gates open at 10:30, practice at noon, and racing will follow.

Spoon River Speedway The MARS Late Model series will be racing on the ⅜ mile, high banked dirt track. Brian Shirley will lead a strong group of drivers along with Jason Feger, Ryan Unzicker, Jeffrey Ledford, and Donny Walden. The Annual Gary Cook Jr. Modified race will pay the winner $2564 and will draw a strong contention of drivers as well. Midgets and Hornets will join the program. Gates will open at 5, practice at 6, and racing will start at 7.

Macon Speedway The Memorial Day racing weekend will conclude with a program at the ⅕ mile, “Mighty” Macon Speedway. There will be twin 50’s for the Big 10 Late Models and Modified classes. The night will also include racing in the Pro Mods, Sportsman, Stock Cars, Hornets and Micros. 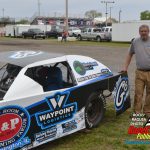