Second generation driver Conrad Miner was the B-Modified winner as the event drew 35 drivers and 15 from Illinois.

The Ledford Racing Team from Pontiac made the 3 ½ hour trip for their first race of the year.

Michael will be racing full time in the Modified class after dividing his time in the Sportsman and Modified class last year. The 15 year old, known as “the Madman” finished second in Sportsman points at Fairbury and took the checkered flag twice. Ledford was able to finish in 13th in Fairbury’s Modified division,plus gain valuable seat time racing at several other tracks.

“ At first it was a little adjustment going from the Sportsman to the Modified,” Michael said. “ You have to drive the Modified harder. I felt midway through the year I was getting accustomed to it.”

Jeffrey, a rising senior at Bradley University, placed second in Modified points at Farmer City and Fairbury, and won one Summit Modified race at Fairbury. Ledford received a big honor by winning the Modified Sportsman award at the 2019 UMP banquet.

“ I was really surprised,” stated Ledford with the nickname “ the Phenom”. “ It’s nice to see people recognize you when you show respect to everyone”.

Jeffrey will make the jump into the Late Model class. Driving a Rocket Chassis and with a new engine, Ledford enters the year with great anticipation.

“ Chad Mullins came out with a new engine that has changed the game for teams like ours that are racing against drivers that have the wide bore Ford,” Jeffrey spoke. “ I got the chance to go with Mark Bush to the Rocket Chassis seminar. I was able to talk with Mark Richards hours on end.

At the Pevely race MIchael fought a tight race car in his heat race, missing the transfer spot by one position. Starting second in his B-Main, Ledford jumped into the lead, taking the win, and started 21st in the feature race and took 10th iat the finish.

“ We went back to an old setup for the B-Main and it worked out,” Michael said. “ In the main race, I took my time and slowly worked my way to 10th.”

Jeffrey was racing in the final transfer position in his B-Main until the white flag, when Frank Heckenast Jr. was able to take the spot.

“ It was a heartbreaker,” spoke Jeffrey. “ I spun the tires a couple of times and they overheated, losing traction. It was a learning experience, but we are proud of how the night went. We definitely left with our heads up.”

The race at Pevely was limited to 700 spectators and race teams were limited to six members. The race was also featured that night on DirtonDirt.com. Although the Ledford family were grateful to finally get a race in, they admit to missing their Farmer City/Fairbury family.

“ Right now our plans are to race at Granite City and Pevely at the end of May,” said Jeffrey. “ We all feel bad for the promoters in Illinois. It is tough enough on them but now with this virus, it has gotten rougher. As you saw at Pevely, half of the race teams were from Illinois and there were a lot of fans from Illinois. That's a lot of Illinois money going into Missouri.”

Many people might not understand that the race community from the track officials, fans, and race teams are one big family. Regardless of if there was a good race or bad race, everyone likes to gather together at the end of the evening for fellowship.

“ We definitely miss our racing family.” closed Chrissy Ledford, ( mother to Jeffrey and Michael, and wife to Jay). “ It was great to be at the track and see the boys enjoying what they love to do. Hopefully all of this can be figured out soon and we can get our race family back in Illinois. We do miss them all.” 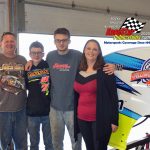