With rain falling on the track, Las Cruces, N.M. driver Garrett Alberson took the lead from Brian Shirley after a caution on lap 32. Alberson was able to outdistance Shirley to earn the biggest win of his career in taking the $12,000, 60 lap race. English finished third, with Unzicker, and Feger completing the top five.

This Friday and Saturday night the MARS Racing series will be at the Farmer City Raceway and Fairbury Speedway.

An open practice session will be held from 6pm-8pm, with a band to entertain the crowd on Thursday. Friday will start with hot laps at 6:30, qualifying at 7, and racing will start at 7:30. Defending Farmer City 74 race winner, Jason Feger will look to repeat in the $10,000 to win race. Among the competitors that will be on hand for both nights will be Bobby Pierce, Ryan Unzicker,Mike Spatola, Dennis Erb Jr., Shannon Babb, Brian Shirley, Tanner English, and Devin Moran. The AMS Modified series will have a $2000 to win feature. Pro Late Models will race for a $1000 to win and a large contingent of Street Stocks will be in a $500 to win special. McKay Wenger (Late Model), Kyle Hammer (Modified), Chase Osterhoff (Pro Late Model), Jeremy Nichols (Street Stock), and Dion Smith (Hornets) were last week’s feature winners.

Titan Industries and Mackinaw Valley Powder Coating will present this Saturday’s “ Spring Showcase” at the Fairbury Speedway. Along with the mentioned drivers, Brandon Sheppard, Jimmy Mars, and Scott James will contend with Derek Chandler, Donny Walden, Bob Gardner, and Fairbury’s winningest driver, Kevin Weaver in a $15,000 to win, 50 lap race. $3000 will go to the winner in the 30 lap, Modified race which is sure to attract many of the top open wheel drivers from throughout the area. Stands will open at noon, practices at 5:50, time trials at 6:15, and racing will begin at 7.

This week a regular weekly program of Late Model, Mid-Am, Street Stock, and Pure Stock racing will be held on the ⅓ mile paved track. Stands open at 5, with qualifying at 6:45, and racing will start at 8.

Kankakee County Speedway The track will hold an open practice this Sunday from 1-5 pm, with the opening race scheduled for May 21.

Macon Speedway The speedway will honor all active and retired military personnel on “Armed Forces Night”. Show your ID and receive free admission as fans will be treated to Pro Late Model, Modified, Pro Mods, Street Stock, Sportsman, Hornets, and Micros. Gates open at 5, with hot laps starting at 6, and racing at 7.

Bohmer’s Rt.66 Raceway The kart racing season is scheduled to open this Sunday with a Junior 1, $100 to win special. Clones, Junior classes, Rookies, and Champ Karts will also be on hand. Gates open at 10:30, practice at noon, and racing will follow. Free spectator admission and concessions are available. 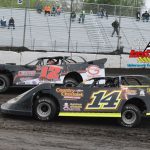