The green flag will wave in Central Illinois on March 26-27 as the LaSalle Speedway will host the 10th annual “ Thaw Brawl”. On Thursday, the ¼ mile clay oval will have an open practice session from 6-9 p.m. The MARS Late Model series will headline the weekend program with double features on Friday with each paying $3000 to the winner. The Modified class will be featured with $1000 to win races and Street Stock drivers will go for $500 to win on both nights.

The rain date will be on Sunday,March 28.

The Farmer City Raceway has averaged between 40-50 cars in their early practice days as the speedway will begin their 2021 race season with the World of Outlaws Late Model series in the 11th annual “Illini 100” on April 2-3.

The track will hold an open practice this Sunday. Another practice will be held on Thursday, April 1 from 6-9 p.m.

Gates will open at 1 on Friday. Hot laps begin at 6:30, with time trials, heat races, and last chance racing. Street Stock will join the Friday show with $300 to the race winner. Pro Late Models will race with $500 on the line. Depending on the Modified car count, the Modified class will hold multiple features (15 car minimum in each race) and $600 to win. WOO Late Models will tackle the ¼ mile dirt oval in a 25 lap, $6000 to win shootout.

Saturday the gates will open at 12:30. Hotlaps start at 5, followed by time trials and heat races.

$2500 will go to the winner of the Modified race and a strong contingent of Pro Late Models will look to take the $1000 first prize. Three time Illini winner and Outlaw champion, Brandon Sheppard will look to add another trophy to his case as the Late Model winner will receive $20,000 in the 75 lap main event.

The Fairbury Speedway has added over 1200 tons of rich Illinois black dirt to resurface the fabled, ¼ mile track courtesy of Valley View Quarry and Limestone Transit for the 2021 season.

“ With all the racing that takes place, so much dirt is lost over the wall and in the air,” spoke track owner Matt Curl. “ After so many races the track got to where we couldn’t prep it like we would like”.

Among other projects race teams and fans will notice will be a new Whelen lighting system on the inside of the track for the drivers safety and a building will be refurbished on the backstretch to house Fairbury Speedway merchandise.

“ I can’t thank Randy Rhoads, Chad Bauman, Steve Wahls, Bauman Farms, Mike Opperman of Opperman Construction plus all the track staff for all the work they are putting in,” Curl added. “ We are continuing to make improvements to the track and grounds and look forward to a great race season here at Fairbury.”

The area’s only paved facility, the ⅓ mile Grundy County Speedway in Morris has April 17 and the 24th as practice days. May 1 will be the first race of the year before returning to Friday night racing. 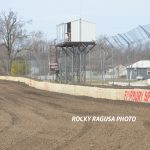