During the 1960’s at many of the tracks in Illinois, the Super Modified or Rail Cars were the featured class. Saybrook’s Marland Riblet raced Coupes and Modifieds before an opportunity to move into the Rail Cars. Racing as many as five nights a week, Riblet found moderate success competing against the hot shoes of the day like Bubby Jones, Chuck Amati, Steve Cannon, Larry Cannon, and Dean Shirley. Following a successful 1967 season, finishing sixth in points at Fairbury, Riblet hung up his helmet to raise his family. In 1995, Riblet heard that his beloved #3 Rail was sitting in a corncrib in Fisher.

“Harris Drenan had the car on his property,” recalls Riblet’s son, Greg. “We went and looked at the car. Dad was so excited to see it. Drenan sold him the car. Dad, along with Larry Retter, and Gunner Sullivan got the car the way it used to look.”

Art Fehrman formed the Illinois Vintage Racing Association which featured Vintage racing and reunions for the drivers, crews, and fans. Riblet would travel to the tracks, bringing his Rail to display. “Dad really loved to take the car around and meet the people,” Riblet said. “He enjoyed telling everyone how the car was built buy their own hands.”

Mr. Riblet passed away in May 2009. Greg, along with his wife, Traci continue to travel the different reunions and showcase the car. Pictures from the old racing days, along with restoration pictures, and various memorabilia are proudly displayed. “It is really fun to meet some of the drivers from Dad’s days of racing and hearing their stories,” Riblet said.

In 2013, the Riblet’s received the honor of having the car at the famed Knoxville (Iowa) Speedway. Located in the museum, the car was joined by several cars driven by Mario Andretti. A popular car with many fans, the car received an award during the Knoxville Nationals parade. “It was really an honor for all of us to see the car at one of the great facilities in dirt track racing,” said Riblet. “I know Dad would be smiling very proud.”

The next reunion will be held at the Lincoln Speedway on July 21. Vintage race cars will be on display, along with old memorabilia, and drivers from the past. “I get a kick out of going and telling how the car came about and showing how racing use to be. I can’t thank dad enough for restoring the car. To see how the fans react to the car is priceless. “

Farmer City Raceway $5 will get you in the gates on Fan Appreciation Night. Four classes will be in action, plus a special fireworks show will be held. Hot laps start at 6:30 and racing at 7:30. Donny Walden (Late Model), Allen Weisser (Modified), Logan Moody (Pro Late Model), and Jason Maier (Street Stock) are the current track point leaders.

Grundy County Speedway Various activities are planned for the children on Kid’s Night at the races. A Full program in five divisions will be held. Racing starts at 8. Mike White stopped Eddie Hoffman’s win streak at four in last week’s Late Model feature.

Fairbury Speedway Five classes will compete this week on the weekly FALS CUP program. Hard charger points in each of the weekly classes as the driver that accumulates the most points at the end of the season will be awarded an Alkota pressure washer courtesy of Rural Route Repair. Hot laps start at 5:45, time trials at 6:15, and racing at 7.

Dirt Oval (RT. 66 Speedway) Located next to the Chicagoland Speedway in Joliet, the AllStar Circuit of Champion Winged Sprint Car Series will make an appearance along with the USAC Midgets. Racing starts at 7:30. On July 1, the rescheduled DIRTcar Summer Nationals Late Models and Summit Modified National race takes place. Racing will start at 7:30.

Macon Speedway Pro Late Models and Modified drivers will each have to a 40 lap feature race. Racing will also be held in four other classes. Hot laps begin at 6 and racing at 7.

Peoria Speedway A regular night of racing is planned for the clay track located on Farmington, hot laps will begin at 5:30 and racing at 6.

Lincoln Speedway The DIRTcar Summer Nationals returns to the Logan County fairgrounds, along with the Summit Modified Nationals and POWRi Lucas Oil Midgets. Hot laps begin at 6 and racing at 7.

Bohmer’s Rt. 66 Raceway A afternoon of kart racing in five classes. Gates open at 10:30, practice at noon, with racing at 1. Spectators are admitted for free. The track is located between Chenoa and Pontiac on Rt. 66. 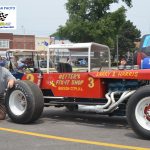