A driver that was the talk of the pit area last year as a can't miss future star of the area tracks was the #14 Modified, driven by Caden Mcwhorter. With impressive credentials in kart racing, Mcwhorter raced in the Hobby- Modified class at Fairbury, before making several attempts in the Modified division late last year.

Racing for seven years, Mcwhorter competed on the Maxxis Midwest series at tracks in Nebraska, Kansas, Missouri, Wisconsin, and Iowa. In 2018, Mcwhorter won the Maxxis Midwest Jr. 2 championship, finished fifth in the Maxxis Nationals, and placed second in the prestigious Maxx Daddy Jr. 2 race in Missiouri. With around 90 feature wins to his credit, one of his proudest moments was sweeping the weekend at the King of Kings indoor race in Martin, Tennessee in 2019.

in six Hobby-Modified races held during the short 2020 season at Fairbury, Mcwhorter was able to post six top five finishes,including a pair of seconds against drivers with more experience. Unable to pick up a feature win, Mcwhorter claimed win two heat races with the Hobby-Modified class. Racing one time with the B-Modified class at Farmer City, Mcwhorter was able to take a heat race win. Concluding the year, Mcwhorter made the leap into the full fledged Modifieds, gaining experience at Lincoln and Fairbury. If Fairbury Speedway had tabulated points for the entry level Hobby-Modifieds, Mcwhorter would have won the championship with his consistent top five finishes.

Mike Vallow of Vallow's Body and Chassis in Pontiac, serves as a mentor to many of the young short track drivers ncluding Mcwhorter ,made notes of his talents.

" When Caden first got into the Hobby-Modified, i noticed how smooth he was on the track and how well he hit his marks. Not every driver has that natural ability", Vallow said. " Caden listened well to the instructions on what I would tell him about racing and driving. He can go out on the track and return to the pits, make the changes needed to the car, go back out, and learn from that".

Currently eighth in points at Farmer City and 15th at Fairbury, the Mcwhorter team upgraded to a MBR Chassis for 2021. The 14 year old has posted four top tens at Farmer City, while still searching for his first top ten at Fairbury.

" Driving the MBR car is so much different from the Pierce car we had", spoke Mcwhorter. " There is so much technological differences. It drives a lot better and gets off the turns better. I am finding myself learning all over".

Racing in the Modified class at Farmer City and Fairbury provides a driver with some of the toughest competition on the UMP DIRTcar class. The Mcwhorter team tries to keep the fun in it.

" The competition at our two tracks is tremendously tough ", Mcwhorter said. " If we can finish in the top ten, we feel like it is a good night. I love having my family with me at the races. There is the pressure of doing well in front of my family and friends, but we just go out there each night to learn and have fun".

Modest goals have been set for the year, Mcwhorter is reeducating himself with a new car and new class.

" If we have a top ten finish in a race, it feels like a win to me", closed Mcwhorter. " Down the road I hope to win a few feature races and a track championship. I just hope to go as far as I can in racing". 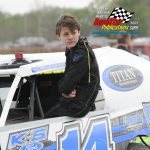 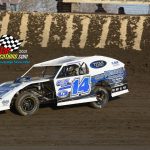