Helping with Darren Kerrins Hobby-Modified car three years ago, Kerrins gave crew member Troy Ricketts the chance to drive his car one racing night. No stranger to racing, Ricketts raced in the Modified class during the 1990’s.

“ When I got behind the wheel of Darren’s car, I said to myself that it was a mistake”, laughed Ricketts. “ So I had to get a car”.

“ It really meant alot to me” , said Ricketts. “ You strive and strive to get there and we were finally able to get it done”.

At the final race of the 2020 season at Fairbury, Ricketts decided to race with the Modifieds. “ That was the most fun I had all year in the car”, explained Ricketts. “ I was able to run with a few of the cars , but dropped out of the race”.

During the off season, Ricketts found a deal on an older Impressive Race Car. Speaking with his wife, Laurie, they agreed to move to the more powerful Modified division.

“ I wasn’t getting any younger, so if I was going to move up, now is the time”, Ricketts said.

The technology has and continues to change in racing. Last week, Ricketts posted his best finish in the Modified class with a 12th place run.

“ I am constantly studying the information on shocks”, Ricketts said.” Plus we have been working the other bugs out of the car”.

“ These guys have been a tremendous help to my car, as well as Darren’s”, Ricketts said. “ I also owe a great deal to my wife Laurie. She supports me in what I do”.

“ Darren and I have the same sponsors on both cars” explained Ricketts. “ They get two times the advertising. When I decided to go Modified racing, several of the sponsors were able to help with that. Between the sponsors and crew, I couldn’t do it by myself”.

The Modified class is one of the toughest classes to win in or make a feature race. Ricketts has modest goals for the year.

“ When you have 25 or more cars in your class on a race night, you have your work cut out for you,” closed Ricketts. “ If I can make the feature and come home with a top ten finish, we would be happy. I have bigger goals, but I am going to be feasible”.

Grundy County Speedway A regular night of racing will also feature Spectator Drags. Gates open at 5 and racing will start at 8. Last week Paul Shafer Jr. picked up his fourth win in the Late Model class.

Kankakee County Speedway Modified drivers will compete in Twin 20 lap features this week, plus all of the track classes will be in action. Stands open at 5:30 and racing at 7:30. Nick Clubb (Modified) and Chase Osterhoff were among the feature winners from last week.

Fairbury Speedway Edelman Inc. will present this weekend’s 25th edition of the Bob and Pappy Allen Memorial race. The Kidz Mods Racing series will join in on the program along with a FALS Cup weekly program. Hot laps/qualifying will start at 5:45 and racing at 7. Children ages 5-6 be sure to register under the front stretch grandstand for the chance to participate in the Dash For Cash.

Macon Speedway The Big 10 Street Stock drivers will have a $750 to win special this week along with a regular weekly program. Hot laps start at 6 and racing at 7. Jose Parga continued his winning ways in the Pro Late Model feature.

Spoon River Speedway A check for $2700 will go to the winner in the Modified race, plus the POWRi WAR Sprint Car series will headline the night’s card. Hot laps will begin at 6 and racing starts at 7.

Peoria Speedway A regular weekly show will take place with racing at 6.

Bohmer’s Rt. 66 Raceway The Jr. 2 class will be featured in a $125 to win special. Rookies, Juniors, and adults will test their skills on the ⅛ mile dirt track. Practice will start at noon and racing at 1. Free spectator admission and fans are allowed to bring their own concessions. The track is located on Old 66 between Pontiac and Chenoa. 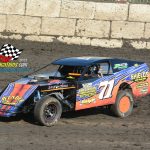