High Atop the Rock by: Rocky Ragusa
July 3, 2019 Gary Gasper

Making several appearances last year in the Modified class, Grant Park’s Neil Martin has become a regular this year at Fairbury and competes at Kankakee County when his schedule allows for it. The 38 year old Martin, has been racing for 26 years, on the dirt and pavement. After racing karts, Martin moved into the cost efficient I-Mod class that races at Kankakee and Shady Hill Speedway.

“We won a few features at both tracks, plus when Plymouth Speedway (Indiana) was paved we won the first race for the I-Mods there,” recalled Martin. “I also won the first race at Plymouth when they made it into a dirt track. I am really proud that we completed a clean sweep at Grundy County when we ran there.”

Following the 2017 season, the I-Mod series elected to make several changes for the rules on the cars. Martin went over the changes and decided it would cheaper for us to just race in the regular Modified class.”

Martin had an old Modified chassis in his garage and with a 2-barrel I-Mod engine began racing in the ultra-competitive Modified division. Although down on power last year, Martin used the track time to become accustomed to the car and Fairbury.

“We really enjoy racing at Fairbury,” Martin said. “I have raced at a lot of places, but Fairbury is my favorite. Everyone is so nice to us and they thank you every week for coming. As a driver, it really means a lot to have that respect from the track crew.”

While many race teams travel to the track with an enclosed trailer and cars are draped in vinyl graphics, Martin carries his car on an open trailer with hand painted numbers and sponsors on his #88.

“My dad and I run Martin Signs. He painted race cars in the past and I always liked that look,” Martin spoke. “It looks original and down to earth. We have an enclosed trailer, but I like to carry the car on our open trailer. On the highway, kids will see your race car and start waving to you, getting all wide eyed.”

Setting 12th in the current Fairbury Modified point standings, Martin’s goal at the start of the season was a top 20 in track points. “We just need to make the feature races. I think we have done alright so far,” said Martin. “I have gotten a lot of help from Jeff Curl. We are getting faster and faster each race. That is the main thing. “

“I also want to thank all the race fans and again, the track crew,” closed Martin. “I am still trying to figure the car out. We have a tough class here. I will just have to get on my game a little harder.”

Kankakee County Speedway It will be Fan Appreciation Night with fireworks planned. Modified teams will have the night off. Racing starts at 7:30. Chad Osterhoff (Pro Late Model), Jamie Lomax (Modified), and Jerrad Krick (Street Stock) were among last week’s winners.

Lincoln Speedway The next race will be on July 12. After Christopher Bell won the POWRi Midget race, the rains came and washed out the remainder of Sunday’s Summer National race. Officials are working on rescheduling the Late Model and Modified races.

Fairbury Speedway A diverse program of racing will take place this week. Some of the best Midget drivers in the country will test the demanding, ¼ clay oval as the POWRi National Midget Series returns for a 30 lap feature race. Many of the top regional 410, Winged Sprint Car drivers from the MOWA series will be showcased in a 25 lap feature. Late Models (30 laps) and Modified’s (25 laps) are also on the show. Hot laps start at 5:45, time trials at 6:15, and racing at 7.

Macon Speedway The Summer Nationals will be in action on Thursday for the only 100 lap race on the tour, in the Herald-Review 100, paying $5000 to the winner. The Summit Modified Nationals and Pro Modified classes will also be featured. Saturday, the Mid West Street Stock series will headline an outstanding night of racing, along with Pro Late Model, Modified, Hornets, Sportsman, Pro Modified, and Micros. Hot laps will start at 6 and racing at 7 for both nights.

Peoria Speedway A regular weekly program in five classes are on the agenda this week. Mike Chasteen Jr. with seven Late Model and 6 Modified wins will be the man to beat. Hot laps start at 5:30 and racing at 6. 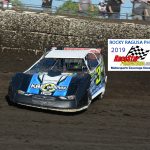 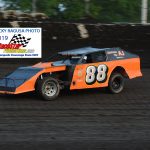