Quite as a mouse off the track, Scott Schmitt is mightier than a lion as he works the infamous cushion each week at the Fairbury Speedway. Still searching for his first Late Model feature win of the year, Schmitt posted a third place finish run last week for his best finish to date.

From Tonica, the 32 year old has been long time friends with Ryan and Eric Dauber. The Dauber brothers were the local favorites at LaSalle Speedway and Schmitt journeyed out to the track to see his friends’ race. Schmitt became interested, first working on Ryan Dauber’s car. Schmitt got the bug and got into the Street Stock class, winning the 2004 track championship at LaSalle. Progressing into the Midwestern Late Models and UMP Late Models, Schmitt picked up two Late Model track titles to add to his resume. When LaSalle scaled back on their schedule, Schmitt began to hit other tracks in the area.

“We really liked Fairbury,” said Schmitt. “I struggled for the longest time here, but it has gotten better for us. The track staff and fans are nice to all of us.”

Headed by two time ump Crew Chief of the year, Fairbury’s Terry Aaron, Schmitt is at ease during the week as Aaron maintains the car. “There is so much that goes into these cars. Terry and Wade they do everything on the car. It allows me to focus on our family business. There is no way that I could race without their help,” spoke Schmitt.

As the Fairbury Speedway welcomes the World of Outlaw Late Model contingent and numerous of the top drivers in the country for this weekend’s Prairie Dirt Classic, Schmitt knows he will have to be prepared car and equipment wise, plus mentally prepared, against a stellar group of drivers.

“For a team like us that only races with the Outlaws a couple of times a year, this is a big deal,” Schmitt said. “I have raced with a lot of those guys, but sometimes I get over psyched, and make mistakes. A little mistake can cost you a lot, even in the 100 lapper this weekend. When the top 10-15 are within a tenth of a second of each other, you have to be point on. You have to be on point. The car has to be good, but I will have to stay calm. I have to look at it as a normal weekly race, but it will be hard to do.”

A fast car all year, Schmitt hopes that last week’s performance will propel the #10 into victory lane. “It seems we were in the wrong place at the wrong time early in the year or there would be a part failure,” said Schmitt. “The last two races at Fairbury we have been in the top tem and then one race I started up front and we had a vibration in the car. We are getting there. I want to try to approach this weekend to have fun, make the race, and have a good finish.”

Lincoln Speedway The Dirtcar Summer National Late Models will resume their race at lap 16 after the rains came earlier this month. Brian Shirley was the race leader at the time of the cancelation. The Summit Modified Nationals will have a feature race and the Pro Modified, along with Street Stocks have been added. Racing will start at 7:30.

Grundy County Speedway Last week’s racing program was cancelled due to excessive heat. An on track autograph session and backpacks for the kids, while supplies last will be given out. A full show is planned, with racing at 8.

Fairbury Speedway The long anticipated race that has caught the attention of fans teams and fans all across the dirt Late Model community starts on Friday night. The World of Outlaw Late Models will have hot laps, time trails, and four, 25 lap showdown races. Modified will have the same format, except four, 20 lap races. Saturday will begin as Late Model and Modified drivers will have their last opportunity to move into their feature races, with two B-Mains in each class. Feature racing starts with the Summit Modified drivers in a 40 lap, $5000 to win contest. A 25 lap shootout for Late Models not in the feature will award the winner $2000 to the right to transfer into the 100 lap event. The main race will end the night as 26 drivers line up for their feature that pays $30,000 to the winner.

A remainder that all reserved seating and camping is sold out. Fans will be allowed to put down their blankets under the grandstands (unreserved seats) each day at 2. DirtonDirt.com will offer a pay per view offering of both nights of racing. Log onto the site for information.

Macon Speedway The MOWA Winged Sprint Cars will headline the show, along with Pro Late Models, Pro Modified, Sportsman, and Hornets. Hot laps start at 6 with racing at 7. Chris Dick was the big winner in last weeks, KirbyStrong 100 for the Pro Late Models.

Peoria Speedway All fans will be admitted for $5 on Fan Appreciation Night. A full program headlined by the Late Model and Modified will be featured. Hot laps will start at 6 with the green flag waving at 6:30. 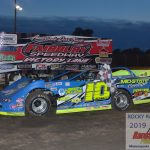 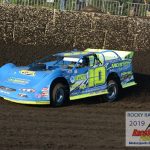