In a racing career that has spanned since 2005, Pontiac’s Derek Chandler wheeled his famed #35 as many as 50-60 races a year. In 2009, Chandler campaigned on the grueling DIRTcar Summer Nationals tour, plus made an attempt to make the lineup for the World 100 at Eldora Speedway. That year alone, Chandler amassed 73 starts at tracks throughout the Mid- West. Since 2011, Chandler scaled back on his racing due to many positive, life changing events. Taking on bigger responsibilities in the families business, becoming a home owner, marriage, and the birth of a son, Chandler found the perfect balance for his racing and taking care of his family.

“It got to be a grind racing,” said Chandler. “You have to have time for everything. Everyone was happy with the decision to slow down.”

Chandler began racing in the Late Models at the age of 17. Married to the love of his life (Christy) in 2013, the birth of his son (Logan) in 2014, and his father’s retirement from the family business (Durham Electric), Chandler, now 31, has grew into level headed adult.

“When you are in your 20’s, it’s easy to take things for granted, “Chandler reflected. “ Since I have gotten older, I have looked on the past as to where I wanted to be. I have to focus on using my time and energy on being a better man for the next ten years. I think self-awareness and having good support to be able to do what you want to do, but also not be selfish and give back.”

“Life changes as you get older. When dad retired from the business, I took a bigger role,” Chandler said. “Christy and I bought a beautiful home in the country. Logan is almost two and enjoys coming to the race track. He loves to roll the tires around. He is at the age where we can share these memories. There is nothing better than being a father.”

Christy and Derek recently announced they will be expecting their second son in August.

“It will be two more for the pit crew,” laughed Chandler. “We are all looking forward to his birth and new adventures.”

With the addition of two new sponsors and the announcement that Fairbury Speedway was increasing the purse for the Late Model class, Chandler and his team made the decision to race weekly and compete for the FALS Cup Championship.

“We were blessed to have several people come on board and help us out. All the excitement at Fairbury, we got together and decided the hype it up,” Chandler spoke. “We are lucky to have a track like Fairbury seven miles from home. When you have a car setting in the garage and you can race competitively, it’s hard not to take advantage of that and be part of this big thing we have at Fairbury. Unfortunately the rain on Saturdays have kept a lot of us from getting into a flow. We have a new engine in the car and I feel if we can have a couple of good weeks before the Prairie Dirt Classic, I think we can catch a second wind and have a strong second half of the year.”

With the high cost involved in racing, Chandler has several marketing partners that have been with him since he first turned a wheel, which speak volumes of Chandler’s character.

“We have a good group of people helping us out. Everyone has stepped up this year,” Chandler said. “Executive Homes, Brucker Farms, and Brent Clark Farms and Trucking joined the team this year. Plus we have Pontiac Dairy Queen, Durham Electric, Bob Pierce Race Cars, Action Suspension, Superior Auto Detailing, Dave and Patty Lee, Jay’s Heating and Cooling, Pontiac Electric Supply, Weber Auto Body, Kemp’s Upper Tap, BMJ Enterprise, The Butler Pantry, and The Finish Line Sports Bar. I also need to thank my dad, (Don), Jordon Zimmer, and Mario Vietti for their help at the shop and track. We race for the fun of it, but are looking to getting us some top five finishes and hopefully a feature win before the year is out.”

Grundy County Speedway A full show plus the POWRi Midgets will be in action this week. Racing starts at 8.

Kankakee County Speedway All divisions will be racing this week, plus the I-Mods will have a $500 to win special. Hot laps at 6 with racing at 7:30. Torin Mettille (Pro Late Model) and Joe Brown (Street Stock) were among last week’s winners.

Fairbury Speedway FALS Cup Weekly racing returns featuring the annual Eden/Piercy Memorial race for the CR Towing Sportsman drivers. 25 laps is the distance with $1000 going to the race winner. All classes will be racing this night. Hot laps at 5:45, time trials at 6:15, and racing at 7. Track officials are working with the POWRi staff and looking for an open date to reschedule the rained out POWRi Midget race from last week.

Macon Speedway All first responders, firemen, police officers, deputies, and paramedics will be admitted free with proper I.D. has the track honors your service to your community. A full program in six divisions is planned. Hot laps start at 6 with racing at 7.

Peoria Speedway A regular weekly program in five classes will be held. Hot laps at 5:30 and racing at 6. Mike Chasteen Jr. took the feature wins in the Late Model and Modified divisions. 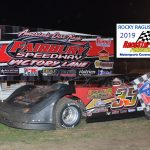 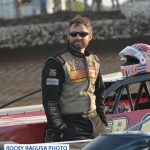