A 19 veteran of racing will be looking to clinch his first ever track championship when the point battle ends next week. Spending his time in the Modified class in the past, Metamora’s Tommy Duncan purchased the Sportsman car of Brandon Pralle. With the intent of his son, Mason taking the reigns, the Hobby-Modified star made the decision to stay in his class.

“Mason didn’t feel comfortable running with the bigger tires,” explained Duncan. “Rather than have the car sitting, I decided to drive it. I knew the car would be competitive. It has been good all year.”

Duncan has spent his entire career in the Modified division. Highlights have included winning the Jon Hamilton Memorial race at the Peoria Speedway and a feature win at every track he has raced. Duncan is also a second generation driver and took over his father’s Modified when he gave up the wheel due to heart surgery.

“My dad and I love to race. It is something that we do together,” said Duncan. “There are the ups and downs in the pits between us, but that is just the competitive nature we have.”

Holding a 77 point lead over Michael Ledford, Duncan didn’t intend to race for the championship. “We had only planned to go to the track, race, and have some fun. We also hoped to get a few feature wins, but everything has just fell into place.”

“I can’t thank those guys enough for all their help and my wife as well.” Duncan closed. “It has been a great year. Watching my son race and the year we are having. Our family just loves to race. I also want to thank all my sponsors too. Without their support we wouldn’t be able to do what we enjoy.”

Fairbury Speedway The stars of the POWRi National Midget Series will be the featured race as part of the annual Fairbury Fair. Pro Late Models and the Modified class will also take part. Hot laps start at 6 and racing will begin at 7.

Farmer City Raceway A full race program, plus the return of the B-Modified division highlight this week’s program. Hot laps start at 6:30, time trials at 7, and racing at 7:30. All military veterans are admitted for $5 and children 12 and under are admitted free with a paying adult. Mike Spatola (Late Model), Allen Weisser (Modified), Chris Dick (Pro Late Model), Josh Griffith (Street Stock), and Matt Mackey (Hornets) were last week’s feature winners.

Grundy County Speedway The Mid-Am class will have a 38 lap special race, plus racing in all classes. Kids 11 and under are admitted free. Racing starts at 8. Current Late Model point leader, Eddie Hoffman took his seventh feature win.

Kankakee County Speedway Sport Compact drivers will have a $300 to win special, plus racing in all classes this week. Racing will start at 7:30 and children 6 and under are admitted for free. Chase Osterhoff (Pro Late Model) and Matt Hammond (Street Stock) won in their respected class last week. Meeting all kinds of adversity the last few years, Nick Clubb finally parked it in victory lane, for his first ever Modified feature win.

Fairbury Speedway A highlight for any driver is a win on Fair Night. In conjunction with the 143th fair, a weekly FALS Cup program will be conducted. With the point race ending on August 24, drivers will be making every effort to position themselves for a track championship or a lock for a top ten. Time trials will commence at 5:30 and the green flag waves at 6:30.

Macon Speedway The POWRi National Midgets will end their swing in Illinois at the 1/5 mike bullring. Modified, Pro Modified, and Hornets will fill out the card. Hot laps at 6 with racing at 7. Chris Dick (Pro Late Model) and Mike Harrison (Modified) were among last week’s winners. 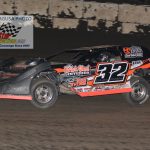 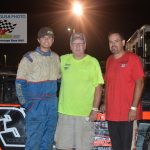