Macon Speedway The ⅕ mile bullring will host two nights of racing this week. On Thursday, the Herald & Review 100 for the Summer National Late Models will be featured in the only 100 lap race on the tour. Gordy Gundaker is the defending race winner. Joining the Late Models will be the Summit Modified Nationals as Nick Hoffman will look to take the title. Saturday, will have six classes in action, headlined by the Pro Late Models and Modifieds. Hot laps start at 6 and the green flag waves at 7 for both nights.

Grundy County Speedway All active and former military members will be admitted for free with their service ID’s this week. A full show of Late Models, Mid-Am, Street Stock, and Pure Stock will tackle the ⅓ mile pave track. Stands open at 5, with qualifying slated at 6:45, and racing to follow. Blake Brown and D.J. Weltmeyer were last week’s Late Model feature winners.

Fairbury Speedway Fans can expect record breaking times with the IRA/MOWA Sprint Cars on the ¼ mile, semi-banked dirt track. TheWinged cars will run for 30 laps and $3000 going to the winner. Late Model drivers will have a 30 lap, $2500 to win race and Modifieds will seek the $1500 to win check. Hot laps start at 5:45, with time trials, and racing to follow.

Peoria Speedway Another Fan Appreciation Night will be held along with a full weekly program. Stands open at 5 and racing at 6. Mike Chasteen Jr (Late Model) and Nick Neville (Modified) were a few of last week's feature winners.

Lincoln Speedway The Summer National Late Models invade the Logan County fairground track for a $5000 to win event. Summit Modified and 305 Sprint Cars join the program. Action starts with hot laps at 6 and racing at 7. 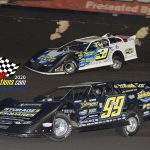