Known for building championship caliber quality race drivers, the Illinois racing community mourns in the passing of Randy Courtney. Courtney, 59 years old and from Bloomington, passed away on Sunday in his sleep.

Being involved in racing his entire life. From driving, to turning wrenches, and car owner,Courtney helped to shape many a driver's career. Working with drivers like Tom Rients, Mark Anderson, Eric Smith,Ryan Dauber, Daren Friedman, Bobby Pierce, and recently Donny Walden, he has been part of numerous race wins and championships.

Bloomington’s Donny Walden had the pleasure of having Courtney a member of his team for the last three seasons. Driving an outdated chassis, Walden and the team got the most out of the car and were prepared to make strides for the 2021 season.

“ When I got the phone call from Ryan on his dad’s passing, I felt as if a part of me died too that morning,” an emotional Walden spoke. “ Randy just wasn’t my crew chief over these last three years, he was my driving coach, my motivator, but most of all a close friend. We all worked hard this off season on putting a brand new car together. With all his wisdom and experience he brought, it just can’t be replaced. He had a unique style on how he motivated his drivers over his career. He would push you to your limit because not only was he the most competitive person that I have ever known,but he truly cared and wanted you to perform at your highest potential. We had very high hopes going into this season together and even though it’s going to be tough without him, I know he would want us to push on and get the job done. That is what I intend to do in his honor”.

Coutney, an auto broker by trade, is survived by his wife Glenda, son Ryan, and step-sons, Connor and Colin Nolan.

Macon Speedway The ⅕ mile, high banked track opens their 76th season with a program of Pro Late Models, Modified, Pro Mods, Street Stocks, Sportsman, and Hornets. Fans can test their skills on the speedway as the ever popular Spectator Drags will be part of the nights entertainment. Hot laps at 6 with racing to follow.

Peoria Speedway A check for $1564 will go to the winner of the Gary Cook Jr. Memorial race for Modified drivers this week. Late Model, Sportsman, B-Mods, and Kids Mods will also be in action. Located at 3520 West Farmington Rd, hot laps will start at 6 and racing will follow. 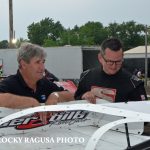