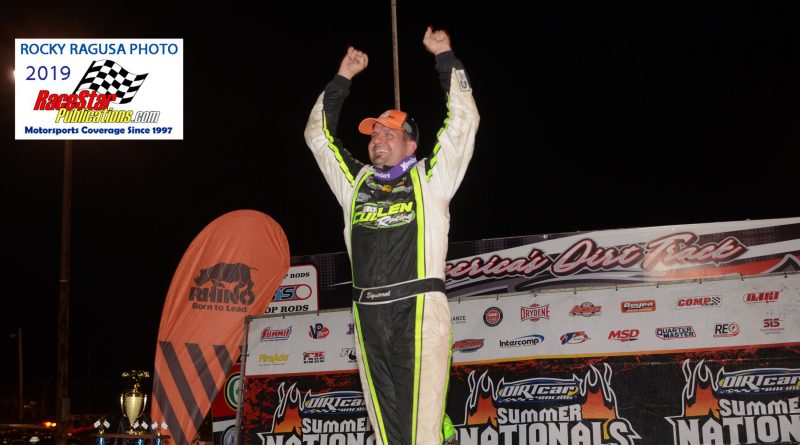 The Squirrel Swift at Fairbury Summer Nationals
By Rocky Ragusa

Fairbury, Ill. (6/22/19) A squirrel is known to be deceptive and will have tricks up their sleeves. Nicknamed “the squirrel”, Chatham’s Brian Shirley tried running the bottom groove in the 50 lap, Summer National presented by Rhino Ag. , but a rally by Frank Heckenast Jr. forced Shirley to the top side of the speedway. Shirley was able turn back Heckenast Jr. and secure the $10,000 check, extending his lead in the month long tour. Mike Harrison won the Summit Modified National race, while Tommy Duncan came out ahead in the Sportsman feature.

The 31st appearance by the DIRTcar Summer Nationals to Fairbury saw 38 Late Models sign in. in time trials, Gordy Gundaker (St. Charles, Mo.) lead group one qualifying at a 12.694, while a lap of 12.631 by Frankfort’s, Frank Heckenast Jr. led group two.

Bronson using his outside, front row starting position, vaulted into the lead at the start, with Shirley, Gundaker, Heckenast Jr., and Tanner English following. On the 13th circuit as Bronson built a straight away lead, he jumped the cushion in two one, and allowed Shirley to close the leader’s margin. While Shirley was able to each closer to Bronson, Gundaker soon joined in the battle for the race lead. Shirley took over the front position on lap 16. Gundaker, hooked up on the bottom, also got by Bronson and got a break as a caution flag evaporated Shirley’s lead on the 19th lap. When the race went back green, Shirley worked the top side to perfection, as Gundaker, Heckenast Jr., English, and Babb followed. Heckenast Jr. made his move, taking second, and tired the top and bottom of the track. Several slide job attempts by Heckenast Jr. proved to be futile as Shirley clung to the lead, earning his 22nd career Summer National trophy and second win of the year at Fairbury.

“My crew told me to run the bottom the last 15 laps,” an exhausted Shirley said. “I tried to run it after that caution. Frankie was good on the bottom and about got me. I just put it to the floor and do what I did on the highside and we were able to come out on top.”

Hoffman led at the start, with McKinney, Tyler Nicely, Harrison, and Weisser trailing. As Hoffman was running the middle, McKinney on the bottom, and Harrison at the top, both looked for momentum to propel them by the race leader. Harrison’s break came on lap 10 as he overtook Hoffman for the lead. After a caution on lap 13, both drivers pulled away from the field. Hoffman kept close tabs on Harrison

in hopes of a mistake by the race leader. Harrison held on to the lead for his first Summit Modified win of the tour.

“Fairbury, you have to live or die by the cushion and nine times out of ten, I live by it.” Harrison spoke. “We have been struggling with this car. We have been working and working on it and hopefully, I think we have found something. The Modified class is tough. Every win you have to cherish like it could be your last win. You just never know.

Polesitter, Ledford took the lead at the drop of the green flag, followed by Roth, Duncan, Wes Odell, and Brian Albus. After a caution on the third lap, Duncan showed his muscle on the restart and quickly wrestled the lead away from Ledford. Duncan wasted little time and pulled away from the field. With four laps to go, Roth overtook Ledford for second and was able to make little gain on the race leader. As Jim Whittington waved the checkered flag, Duncan secured his fourth straight feature win.

“My car has been great all year and I can’t thank my crew and sponsors enough. We have gotten lucky a few times, but it’s been a good year,” said Duncan. 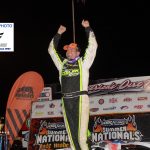 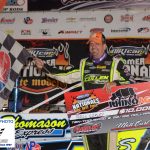 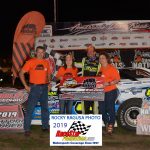 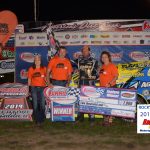 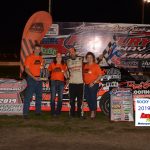 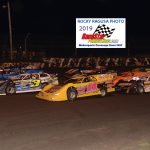 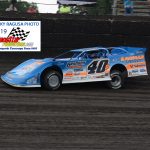 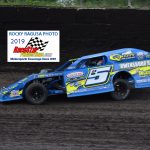 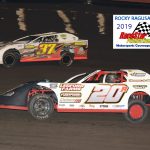 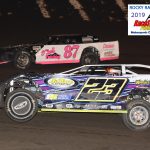 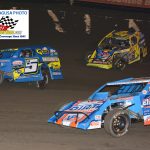 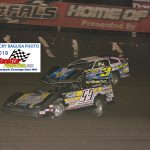 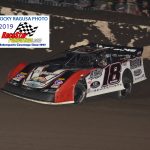 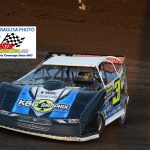 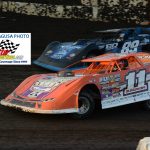 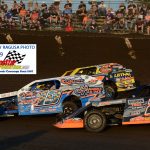 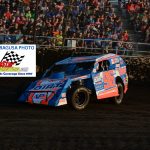 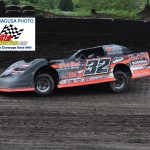