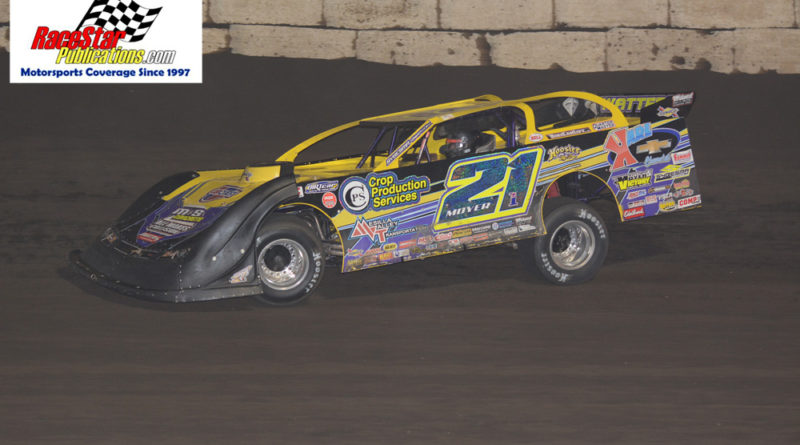 32 Late Model teams representing seven states and Australia looked to take the $10,000 first place check in the 50 lap race. Brian Shirley led group one qualifying with a time of 12.610 and Kevin Weaver posted a time of 12.785 to head the pack for group two.

22 cars started the feature race with pole sitter Pierce taking a commanding lead over Erb Jr, while Babb had to contend with Shirley and Moyer for third. Pierce, running the top side, was able to extend his lead, as he maneuvered through lapped traffic by the 13th lap. After a caution on lap 19, Babb got by Erb Jr. for second and offered a brief challenge to Pierce for the lead. Suddenly on lap 27, Pierce slowed on the front stretch to bring out the caution, as the fan in his car went through the radiator. Babb led on the restart, with Moyer set to challenge for the lead. Moyer led the 30th lap, but jumped the cushion and gave Babb the lead back. Moyer regrouped and reclaimed the top spot on the 35th lap. Moyer, known as “Mr. Smooth”, drove a smooth line on the top side for the remainder of the race and notched his second win on the tour and 98th career, Summer National win.

Running the bottom and then going to the top side at the midpoint of the race, Moyer explained his strategy for the win. “I just went where everyone else was. I expected Shannon to be up there. I just shot it from the hip on what to do. The car was able to run wherever I wanted to go.”

The Summit Racing Equipment Modified Nationals saw 32 teams taking time trials for their 30 lap, $1500 to win contest. Steven Brooks turned a time of 13.684 to lead group one, while Jeffrey Ledford clocked a time of 13.807 to pace group two.

McKinney got the jump on Jeffrey Ledford to take the lead at the start, with Stremme, Brooks, Levi Kissinger, and Weisser trying to hang tight with the leader. McKinney held a 10 car length lead over Ledford before a caution fell on the 14th lap. On the restart, Kissinger and Stremme got by Ledford to take second and the third position, as McKinney continued to stretch his lead. After another caution on lap 16, Stremme was able to alongside of McKinney, but “Magic Mike” withstood the challenge and changed to the bottom groove. Kissinger overtook Stremme for second and looked to battle McKinney for the lead, but a yellow flag waved with five laps to go. On the restart, Stremme and Kissinger made several slide job attempts for the lead, but McKinney stood firm and took his fourth Mod National win and fifth at Fairbury.

“The track was fast tonight,” said McKinney. “I had to stay up on the wheel all night. I wasn’t sure whether to be on the top or bottom. I felt we were faster on the top. Levi threw that slider there. I was going to drive thru him or around him.”

The program ended with the Street Stock class in a $800 to win, 20 lap feature. Jeremy Nichols topped 21 competitors with a 14.833 in time trials. Joe Brown, Nichols, and Tanner Sullivan won their heat races.

Nichols led at the start, with Browm, Matt Maier, Matt Hammond, and Jerrad Krick following. After two early cautions, Nichols continued to hold a five car length lead over Brown, as Krick moved into third. Nichols took a straight away lead, while the battle took place for second. The field was bunched back up for a lap 14 caution. The restart had Maier overtake Krick for second, followed by AJ Meiferdt, and Thomas. The yellow flag was thrown twice with two laps to go. On the second caution, as Nichols exited turn two, his left rear wheel broke, ending his bid for the win. On the restart, Maier led Meiferdt into turn’s one-two. As Meiferdt drove down the backstretch he pulled alongside of Maier and led as the drivers took the white flag. Maier bumped Meiferdt exiting turn two, trying to cause Meiferdt’s car to get squirrely. Entering turns three and four, Maier dove under Meiferdt , as he looked to take the lead. As the two drivers continued to make contact, Thomas was able to sneak by and take the win.

“Those two guys wanted to mess around out there,” Thomas said. “I knew what was going to happen. I will take that win.”

This Saturday night, the Legion Speedway will return with a $5 FAN Appreciation Night. Action will take place with five classes battling on the 1/3 mile, dirt oval.