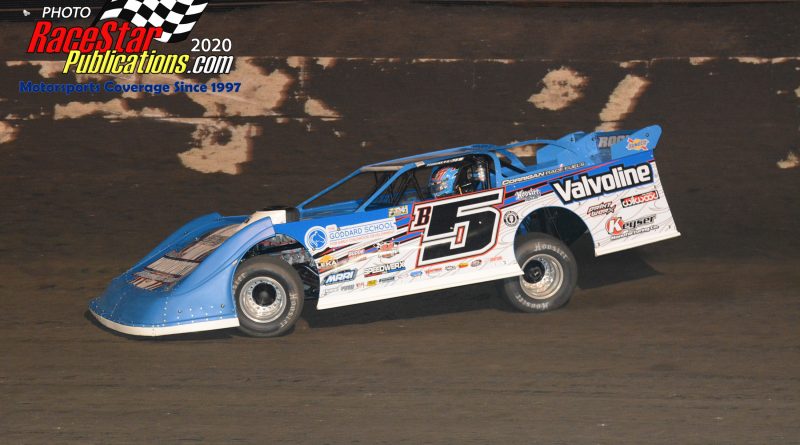 Six heat races were held with the top three finishers in each advancing into the main event. Moos, Josh Richards, Brandon Sheppard, Kyle Strickler, Tanner English, and Jimmy Mars took the wins in their respective races.

Bobby Pierce and Shannon Babb moved onto the 50 lap race by taking the win in the two B-mains.

Starting on the outside of the frontrow, Sheppard took the lead on the start as Moos, Richards, Mars, and Strickler followed. The race saw the first caution fall on the seventh lap as debris fell on the track. On the restart, Richards got by Moos for second,as Sheppard held a five car length lead. Babb caught the attention of the fans in attendance, moving into ninth by the lap 10. Sheppard held a five car length lead over Richards as the leader encountered slower traffic by the 20th lap. Strckler took the third position from Moos, with Tanner English in fifth and Babb in sixth. Sheppard weaved his way past traffic, putting some distance between himself and Richards. Frank Heckenast Jr. brought out the second yellow fag as he spun out in turn one. On the restart, Jesse Stovall tagged the wall on the backstretch for another caution period. Sheppard led Richards by five car lengths on the restart. A thrilling battle was taking place behind the duo with Mars, Strickler, Simpson, and Babb trying every inch of the speedway. Babb moved to the third spot with eight laps left. Sheppard pulled away from Richards in the final laps and at the finish picked up his second win of the year at Fairbury.

Greeted by his family and crew in victory lane, the World of Outlaw point leader commented. “ It is always special to win in our family car. It has been fast all year long. I have not steered away from what I know and what Mark Richards has taught me”.

Richards settled for second with Babb in third. The rest of the top ten had Strickler, Mars, Simpson, Tim Manville, Dennis Erb Jr., Brian Shirley, and English. With his ninth place run, Shirley took the MARS championship by seven points over Heckenast Jr.

Harrison made the top side of the track work in taking the lead on the start of the feature race with McKinney, Harris, Hammer, and Marshall following. McKinney tried the top and bottom of the speedway in his bid to overtake Harrison for the lead. Harrison proved to be relentless in his pursuit for the win and opened up his lead. Gaining redemption after crashing out in Fairbury’s Modified Nationals race, Harrison took his second Fairbury win of the year by over two seconds over McKinney.

“ We did the same thing tonight that we did in the Labor Day race here,” spoke Harrison. “ All of the money races that we have won here, I can’t honestly say that we have been on the same thing car wise. We are always searching for something. We felt we had a good car. We were debating on a setup and I told the boys you make the call and I will drive it”.

Parga led for five laps before Heck moved into the lead. As Heck was making his way past slower cars, second running Moody challenged Heck for first, but Heck kept a safe working distance and picked up his second Fairbury win of the season.

“ I was just biding my time waiting to see what Jose was going to do”, Heck said. “ He slipped up and I was right there”.

On behalf of promoter Matt Curl and his staff, we would like to thank all of the race teams, fans, and marketing partners in their support in the 2020 season. Enjoy the off season and llok forward to the 2021 racing season. 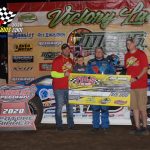 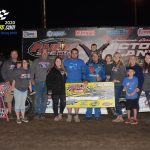 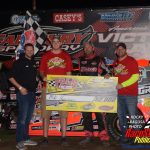 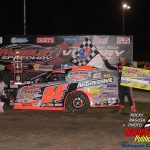 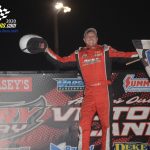 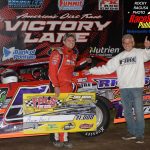 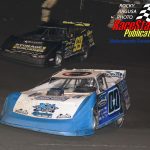 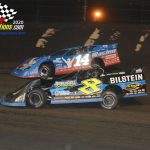 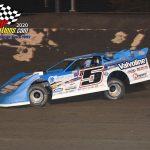 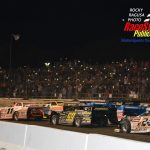 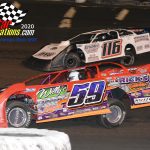 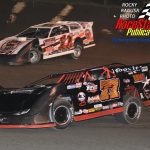 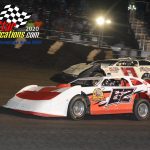 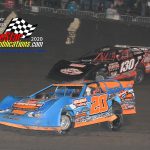 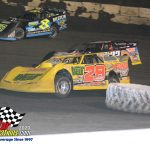 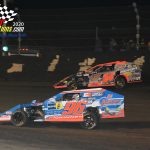 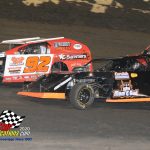 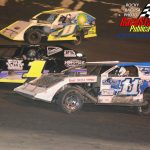 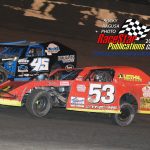 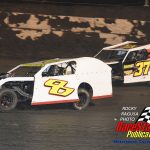 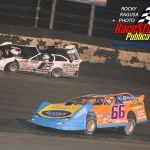