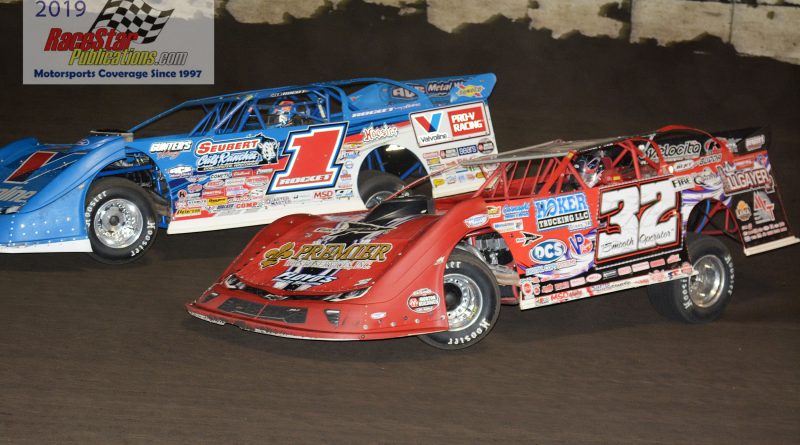 Fairbury, Ill. (7/26-27/19) Since the annual Prairie Dirt Classic has become a two day event, hosted by the Fairbury Speedway and under the direction of the World of Outlaws Morton Building Late Model series, the town of Fairbury comes alive. Race teams and fans from across the country flock to the ¼ dirt track to be a part of one of the premier races of the year as voted the 2018 “ Short Track Event of the Year, voted by Racing Promotion Monthly.

A new record of 72 Late Models entered the 30th annual Prairie Dirt Classic, presented by the Bank of Pontiac. 22 states and drivers from Australia and Canada looked to secure a starting position and hoist the lucrative trophy.

The Summit Modified Nationals would conclude their long trek, with the crowning of the champion, plus a 40 lap race. The open wheel cars saw 53 drivers registered in hopes of winning the $5000 first place money.

The racing activity began on Friday night with hot laps and qualifying. All drivers were divided into four show down feature races. The Late Models would go for $2500 to win, in 20 laps. Modified drivers had 20 sprints, with $500 going to the winner. More importantly the top four finishers would automatically advance to Saturday’s main events.

Picking up the checkered flag in the four showdowns for the Late Models and the remainder of the top four were in Sheppard in a walk away in the first race over Dennis Erb Jr., Boom Briggs, and Gordy Gundaker. Bobby Pierce (Oakwood) drove the topside to win the second race over defending race winner, Devin Moran, Shannon Babb, and Frank Heckenhast Jr. Chris Ferguson (Mt. Holly, N.C.) took a popular win with the fans with Marlar, Brian Shirley, and Kyle Bronson following. Shane Clanton (Zebulon, Ga.) winning the last race over a hard charging Billy Drake. Ricky Weiss and Kent Robinson completed the 16 stars going into the 100 lap race.

B- Mains began the Saturday program. The top two finishers from each race moved onto the night’s feature. In the Modified’s, Chris Arnold (Matoaca, Va.) led flag to flag over Chris Smith. Jacob Steinkoenig (Highland) charge to the win, as Michael Ledford executed a slide job on the last lap to move on.

A last chance show down race for Late Model’s saw Weisser, running the bottom side, take the lead from Hall of Famer, Billy Moyer, with three laps to go in the 20 lap race. Wiesser, had the chance to take the $2000 check or start in the rear of the show. Weisser taking the biggest win of his young career, chose to take the money. Moyer was second, followed by early race leader, Mason Zeigler, Derek Chandler, Mike Spatola, Gregg Satterlee, Jason Feger, Bob Gardner, Joey Moriarty, and Scott Schmitt.

24 Modifed drivers took the green flag and Hoffman showed why he was deserving of his championship. In “Elite” fashion, which is the name of the car he builds, Hoffman roared out to a 10 car length lead. Nicely, Weisser, Spaulding, Jeffrey Ledford, and Harrison raced for the second position, I hopes of tracking Hoffman down. After a caution on lap 11 and 15, Weisser moved into second, as Harrison began to turn up the wick. Running in fourth, Harrison pounded the cushion unmercifully, as he tried to overtake Nicely. Hoffman strutted his stuff end the closing stages of the race, while Wiesser stood in second. Harrison, always a contender for the win, saw his hopes vanish of the 31st lap. Harrison hit the wall in turn one and caused the wheel to break. As the six time champion exited his car, fans stood and applauded his efforts to get to the front. Two cautions fell with nine and seven laps left, but Hoffman was not to be denied in winning his 12th Summit Racing Equipment feature race.

A 27 car starting lineup took the green for the Outlaw feature. Sheppard led early before Pierce took command on the 26th circuit. Pierce’s father, a five time winner of the race, stretched his lead to a straight away, and as he looked to win a race that has plagued him. Sheppard chipped away at Pierce’s lead as he took the white flag. Looking like Pierce was about to claim the win, Sheppard gave it his all. With momentum on his side as he exited turn two, Sheppard pulled a slide job on Pierce entering the third turn. Pierce tried his own slide job, but battling power steering problems, got into the rear of Sheppard and hit the wall. Sheppard crossed the finish line as fans stood in disbelief. Marlar slipped by Pierce for second, a dejected Pierce took third and gained new fans for his run. Canada’s Ricky Weiss was fourth and Gundaker came in fifth. Clanton, Heckenast Jr., Ferguson, Shirley, and Junghans completed the top ten.

Prior to the features it was announced that next year’s race would pay the winner $50,000 and $2000 to start, as the speedway continues to build on its legacy. This Saturday night, a regular FALS Cup weekly program will be held. Racing takes place in five classes and the green flag with wave at 7. 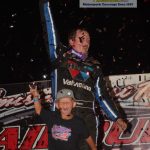 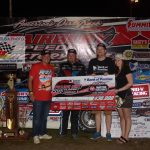 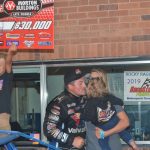 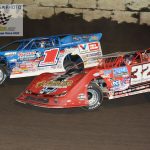 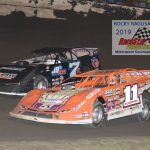 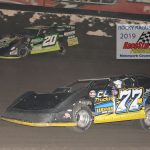 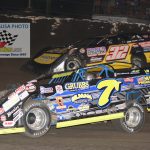 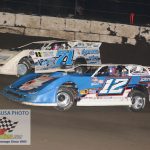 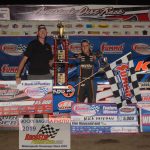 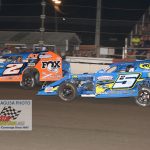 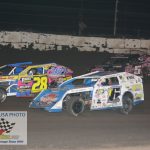 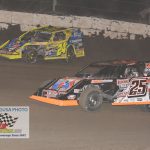 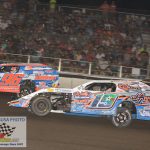 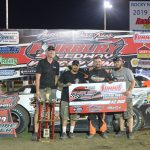 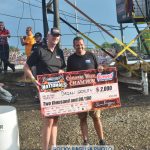 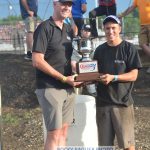