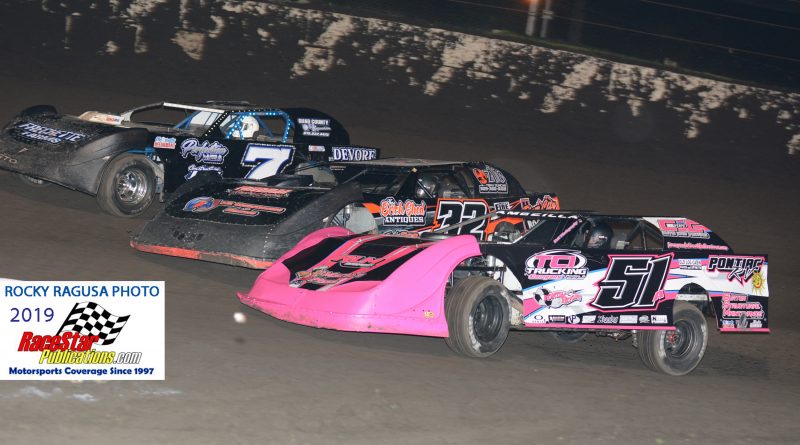 On the initial start, Jay Sparks was bounced around with contact from several drivers, to bring out the caution flag and end his night. The restart had Spatola leading Glasscock, Heckenast Jr., Unzicker, and Brian Shirley before another yellow flag on lap two. The restart had Spatola in the lead as Glasscock receive a challenge from Heckenast Jr. Heckenast Jr. and Unzicker both worked their way by Glasscock and began chasing down Spatola. Heckenast Jr. broke away from Unzicker and closed the gap on the race leader. With 18 laps to go, Heckenast Jr. pulled alongside of Spatola. Slower traffic was ahead of the race leader and hampered Spatola. Heckenast Jr. was able to get by Spatola for the lead and open up a ten car length lead. After a caution with 10 to go, Heckenast Jr. ran the bottom as Spatola ran the top in pursuit of the leader. Behind the duo, Unzicker and Shirley had a spirited race for third, as Donny Walden closely followed. Heckenast Jr. was able to hold off Spatola and take the $2500 check.

“It is really awesome what they are doing here,” spoke Heckenast Jr. “It takes a lot of guts to pay this locally. This was a little tune up for the PDC. Hopefully we can run with those guys. “

Plainfield’s Mike McKinney turned a lap of 14. 396 to earn fast time for the 22 Modified pilots on hand for their 20 lap affair. McKinney, Allen Weisser, and Steven Brooks won their heat races.

McKinney and Weisser led the field to the green flag with Weisser taking the top position. Three cautions in the first five laps kept Weisser from establishing any momentum. After the caution on lap five, Weisser stuck his car on the bottom of the speedway and opened his lead, while McKinney and Jeffrey Ledford dueled for second, followed by Brooks and Daniel Breymeier. At the halfway point, Weisser held a straight away lead over his completion. McKinney finally got by Ledford and began to close the gap on the race leader. As Weisser worked his way by lapped traffic, McKinney was on Weisser’s bumper with two laps to go. On the white flag, McKinney worked the high side as Weisser was on the bottom with a slower car in his path. Weisser was able to move up a lane with McKinney by his side. As the checkered flag was waved, Weisser nipped McKinney as Ledford squeezed by for second at the line.

“That lapped car on the bottom was messing me up, “said Weisser. “ He didn’t want to get out of my lane, so I had to go to the top. McKinney stuck his nose down there, but we had a good run and held on for the win.”

The 10th annual Hubert Memorial race attracted 37 of the finest Street Stock racers for a shot at the $2000 payday. Bourbonnais native, Matt Hammond toured the track at a 15.691 for fast time. Hammond, Jeremy Nichols, Jason Maier, and Rudy Zaragoza won heat races, with Robert Cottom and Justin VanDruen advancing to the 43 lap feature by winning their semi- features.

Hammond took an early race lead as Maier and Nichols battled for second. On the next lap, Nichols got sideways in turn one, losing several positions. Maier, working the top of the track, took the lead from Hammond on the 15th lap and soon found his self with slower cars in his path. The races lone caution period fell with 20 laps to go, as Nichols found his way back in the third spot. Maier led on the restart, as Nichols worked over Hammond for second. Nichols running the bottom drove a smooth race and took second with 15 laps to go. Nichols quickly closed on Maier and moved into the lead with 12 laps to go. Nichols, always a front runner at Fairbury, but the victim of misfortune finally took his first ever win at Fairbury.

“I spun myself out early in the race and I thought it was over for us, “an excited Nichols said. “ This was a stout field of cars. I saw Hammond and Maier’s cars pushing up in the center and that was my opportunity. It is really great to finally get a win here.”

12 Sportsman drivers were on hand for their 15 lap race. Rookie competitor, Fairbury’s Lyndon Whitfill took fast time honors at a 16.082. Heat race wins went to Michael Ledford and Steve Mattingly. Ledford took the lead as the green flag was unfurled. The 14 year old Ledford, drove like a grizzled veteran as Mattingly, Tommy Duncan, and Amber Crouch raced for second. Pontiac’s Ledford stuck his car on the bottom and held a half a straight away lead before Duncan broke away from the pack and gained on Ledford. With two laps to go, Duncan tried valiantly to overtake Ledford for the lead, but the young teenager stood his ground and earned his first career win.

“It was great to bounce back after being involved in that wreck on opening night,” Ledford said. “I want to thank Dad, Daniel Flessner, and Michael Verdun for getting the car back together.”

The Hobby-Modified class drew 18 entries for a 12 lap feature. Brendan Ramer and Mason Duncan took the checkered flag in their heat race.

Duncan, normally a dominator in the class, had his hands full. Derrick DeFord, a regular at Peoria Speedway, hounded Duncan for the lead, as Darren Christensen followed closely. Deford got by Duncan for the lead, but with two laps left, Duncan retook the lead and two his second win of the year.

“That was some hard racing. I hit that hole down in turn two and it messed me up a couple of times, but we came back and got the win,” Duncan said.

This Saturday will be a Memorial Day special. Pro Late Models will be in action along with Late Models, Modified, Sportsman, and Street Stocks. 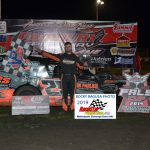 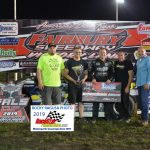 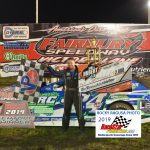 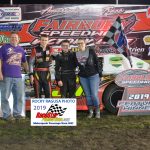 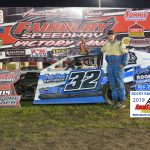 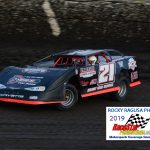 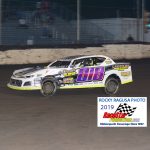 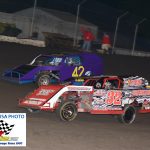 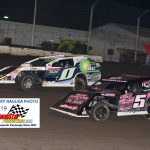 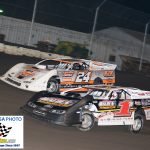 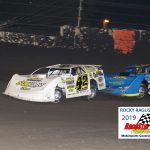 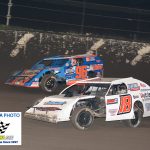 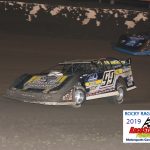 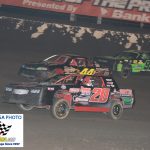 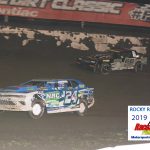 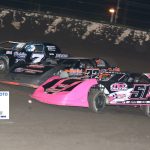 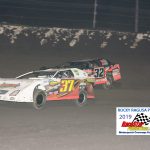 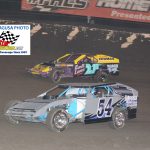 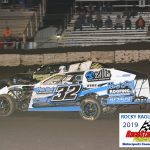