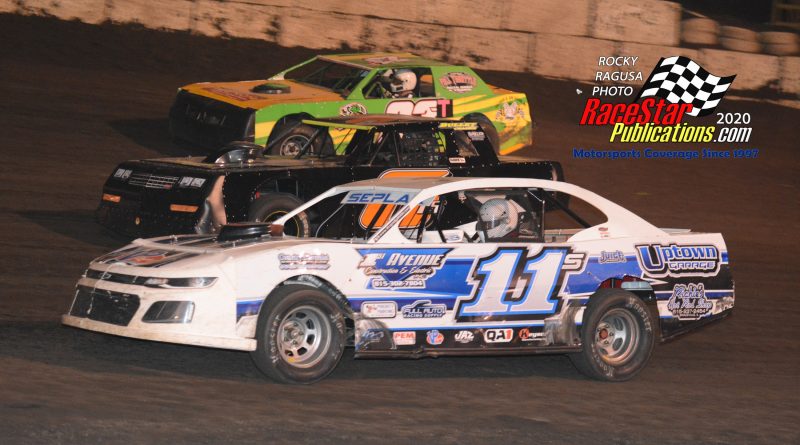 Wenger By A Straight Away At Fairbury
By Rocky Ragusa

Fairbury, Ill. (7/4/20) In addition to an Independence Day firework display during intermission at the Fairbury Speedway, race fans were treated to sliders of a different sort. Everyone stood on their feet, witnessing the talent of the drivers in feature action. McKay Wenger (Late Model), Mike Harrison (Modified), Nick Seplak (Street Stock), Tommy Duncan (Sportsman), and Thad Gee (Hobby-Modified) were first to the line during the FALS Cup weekly racing program.

Using his outside front row starting position, Wenger made short order of his competition and jumped out to an early lead. Accelerating around the ¼ dirt oval, Wenger caught up with the tail end of the field by lap seven. After two yellow flag situations, Wenger pulled away from the field, as Allen Weisser, Ryan Unzicker, and Spatola trailed. Spatola soon found himself in second and closed the margin on Wenger. The race's last caution fell with ten laps to go, giving Spatola his opportunity to capitalize for the lead. On the green flag, Wenger was shot out of cannon in opening up a straight away lead. Behind him, Spatola, Weisser, and Unzicker battled for the second position, exchanging slide jobs to the delight of the crowd. At the checker flag, Wenger returned to victory lane after going winless last season.

The Modified race saw 40 drivers vie for a starting spot in their 20 lap, $1500 to win race. Mike McKinney was the quickest in time trials with a lap of 14.025. Four heat races saw McKinney, Mike Harrison, Allen Weisser, and Jacob Rexing earning wins. Justin Gregory and Rich Dawson won the B-mains.

Harrison took the lead on the start with McKinney stuck to his bumper. The two wheelmen rode the topside of the track, and frequently exchanged slide jobs on each other during the course of the race. Harrison was able to open up a small lead during the final five laps and took a hard fought win.

“ McKinney has picked up his game the last few years,” spoke Harrison. “ Anytime you can come to his home track and beat him, you have done something. Fairbury has been good to me in the past, but the local drivers here are tough.”

Sticking to the bottom groove of the track,Seplak was able to turn back savvy veterans Joe Brown and Rick Thomas for his first ever Fairbury feature win.

“ Man, what a race,” an excited Seplak spoke. “ Honestly, I didn’t think we could win it tonight. Dad and I have been going back and forth every week trying different things and it finally worked out.”

Veteran Macon Speedway driver Wes Odell was the Sportsman fast qualifier at a 14.836 over 15 other drivers. Lyndon Whitfill and Tommy Duncan won their heat races.

After a caution with seven laps to go, Duncan pulled away from early contenders Odell and Anthony Craven for the win.

“ The track was good for our race,” explained Duncan. “ The competition is getting real close. I am going to have to get to work.”

The night’s racing program ended with a 12 lap Hobby-Modified race. Thad Gee and Macy Vaughan, the race’s heat race winners, started on the front row. Vaughan led for five laps before Gee was able to move to the front following a lap five caution. From there Gee held a 10 car length lead over Vaughan and captured the win.

“ That was a fun race,” spoke Gee. “ I really enjoy racing with Macy. She was worrying me, but I was able to get a good restart after that caution.

Dustin Mounce, running the top, was able to sneak by Vaughan for second, with Caden McWhorter, and Troy Ricketts in the top five.

Next Saturday night, the Summer Nationals will stop at the speedway with a $10,000 to win race, presented by Rhino Ag, for the Late Model teams. Summit Modified drivers will have a $2000 to win contest, and the CR Towing Sportsman class will see $500 going to the race winner. 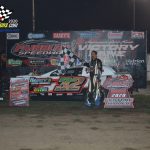 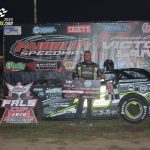 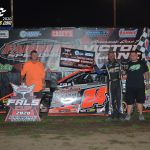 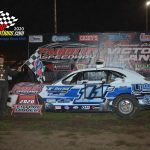 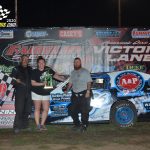 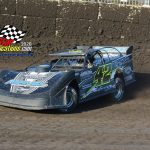 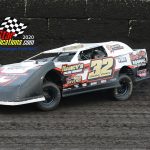 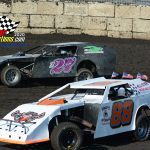 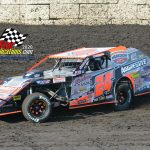 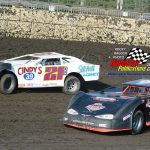 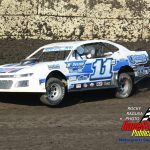 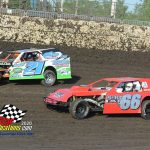 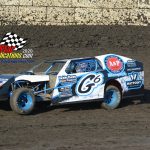 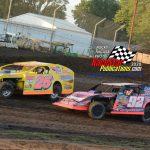 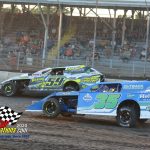 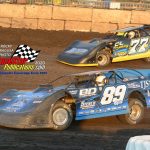 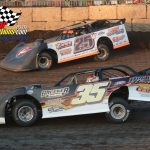 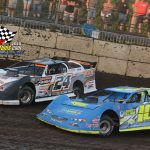 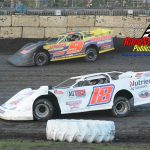 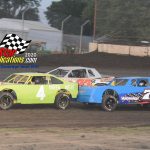 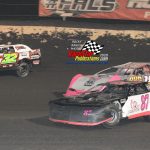 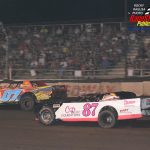 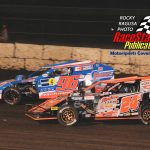 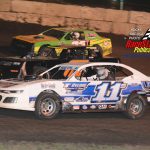 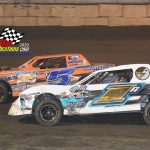