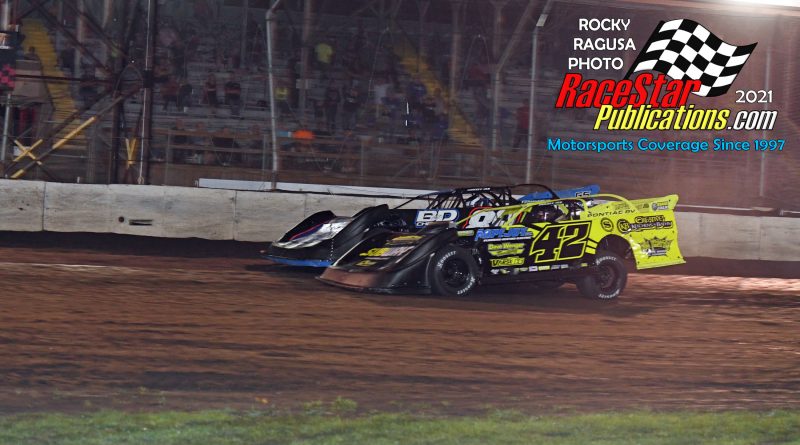 Fairbury,Ill. (7/17/21) Rain during the past week made for a rough racetrack this past Saturday night at the Fairbury Speedway. Despite the conditions, race fans witnessed a barnburner of a feature in the Late Model division. McKay Wenger (Late Model), Nick Hoffman (Modified), Austin Friedman (Sportsman), Zane Reitz (Stock Car), and Chris Tippit (Hobby-Modified) were all victors.

Outside front row starter Miller jumped out to the lead with Duncan, Friedman, Lyndon Whitfill,and 10th starter Tyler Roth leading the way. On the 12th lap, as Miller was working his way past a slower car, Duncan saw an opening to take the lead. Duncan edged ahead of Miller, but Miller caught a rut as the two drivers dove into turn one. Contact was made and Duncan had to go to the rear. On the restart, Whitfill put his car on the top of the track and took second from Friedman. After a lap 15 caution, Friedman got by Whitfill for second and followed Miller on the bottom of the track. Whitfill had a brief battle with Roth before retaking third. With two laps to go, Miller was working his way past a slower car with Friedman on his bumper. The two young guns traded door paint and Friedman inched ahead of Miller. Friedman was able to earn his second Fairbury win of the year.

“ That was an elbows up racetrack tonight”, an excited Friedman spoke. “ I can’t believe that I was able to get by Landen like that”.

Miller had to settle for second, with Whitfill in third, followed by Roth and Dennis Vandermeersch. The rest of the top ten saw Daniel Odell, Duncan, Jim Farley, Makinzi Semmens, and Terry Myers (hardcharger) finish in that order.

Eric Smith turned a lap at 12.986 for quick time as 28 Late Model drivers were on hand for their 30 lap race. Kevin Weaver, Ryan Unzicker, and Mike Spatola won their heat races. Glen Thompson was the winner of the semi feature.

In a race that saw three lead changes among four drivers, Unzicker paced the field for the first 17 laps. Roben Huffman suddenly slowed on the backstretch with the race leaders in his path. Huffman veered to the infield and Unzicker with no place to go, made contact with Huffman to end his night. McKay Wenger led for three laps with Weaver and Spatola in close formation. Wenger slowed enough in turn four to allow Weaver to move to the front. Weaver, in search of his first win of the year, led for the next four laps. A bobble in turn one by Weaver allowed Wenger to retake the lead. Weaver tried to take the lead back, but exiting turn four Weaver slowed enough to allow Spatola to move into second. Spatola did a slide job on the final lap and inched ahead of Wenger, but his momentum slowed him. The two drivers raced side by side the distance of the front stretch and Wenger was able to hang on by 0.012 seconds for the win.

“ We didn’t have the car to win tonight, maybe a fifth place car”, an exhausted Wenger explained. “ I wanted it bad. When the track is like that, you are just racing the track. I don’t even know if all four wheels ever touched the ground in the race”.

45 Modified drivers were in attendance as many were on hand to tune up for the upcoming PDC. Tyler Nicely led group one qualifiers with a time of 13.586. Kyle Steffen led group two with a lap of 13.850.

Current Summit Modified National point leader, Nick Hoffman had his work cut out for him in the 25 lap race. Starting in the seventh position, Hoffman had to battle Nicely and Marshall before taking the lead on lap 13. Poised as the driver to beat, Hoffman was able to take the win.

“ It was nice to get some laps in before the PDC”, Hoffman said. “ The track was very technical, but you could still get around. I found that lane and that helped me to get by Tyler”.

The speedway will be idle this Saturday as preparations are made for the Prairie Dirt Classic on July 30-31. 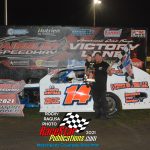 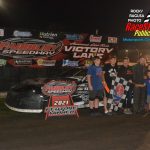 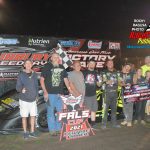 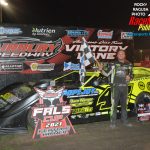 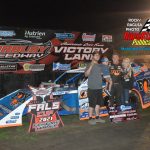 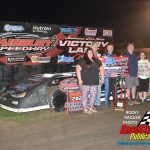 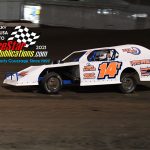 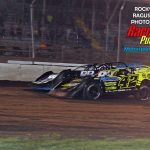 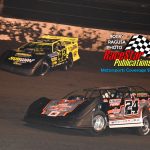 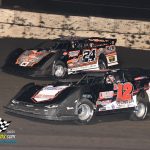 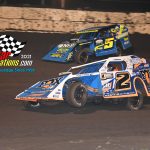 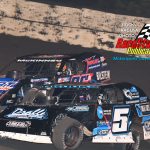 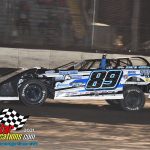 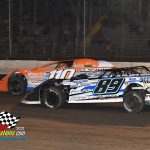 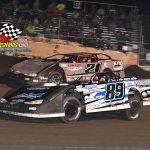 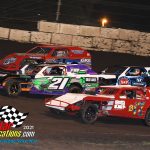 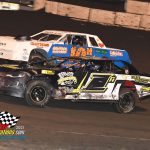 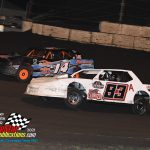 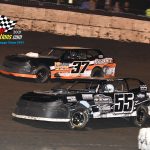 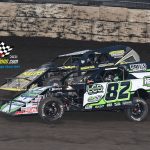