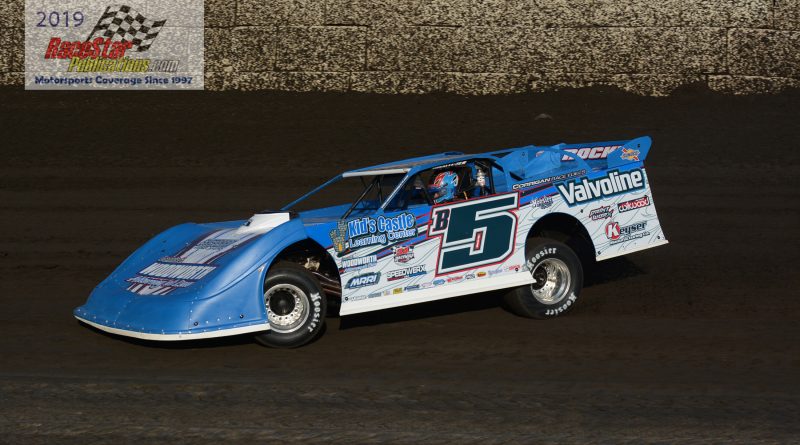 Fairbury, Ill. (10/12/19) A big payday and the prestige of winning a feature race at the Fairbury Speedway drew 107 cars, representing 11 states, for the final races of the year. World of Outlaw point leader, Brandon Sheppard (Late Model), Mike McKinney (Modified), and Dakota Ewing (Pro Late Model) each picked up the win in their class.

Front row starters, Moyer and Babb led the field to the green. Babb led the first seven laps, before Moyer was credited with leading lap eight. Moyer and Babb swapped the lead for the next eight laps. Moyer took over on lap 16 with Babb, Wenger, Shane Clanton, and Sheppard in check. Sheppard moved by Clanton on lap 18 and three laps later, overtook Wenger for third. Moyer expanded his lead as Babb began to fade. After a lap 41 caution for Brian Shirley, Sheppard worked on Babb before taking second on lap 47.Running the top side of the track, Sheppard quickly ran down Moyer and made the winning pass for the win with five laps to go. Moyer took second, with Clanton in third. Wenger turned in a fine performance with a fourth and Babb hung on for fifth. Starting in 17th, Erb Jr. took sixth, followed by Scott James, Scott Schmitt, Drake, and Tim Manville.

Taking the $15,000 win in the family owned Rocket chassis, Sheppard commented in victory lane. “The track was crazy tonight. That was the best it’s been in a long time. With 35 laps to go, I lost the brakes. The last 30 laps I didn’t touch the brakes and I think that made me faster. I was leary about running the top because I couldn’t slow down getting into the corners. I was backing up the corners good enough and the car was good enough to get it done.”

$2000 to win the 30 lap Modified race drew 31 teams to the 1//4, dirt track. A lap of 14.050 by Mike McKinney (Indianapolis, IND.) and a time of 13. 915 by Jeffrey Ledford (Pontiac) paced Group time trials. McKinney, Jason Hastings (Kankakee), Ledford, and AJ May (Creve Coure ) were the heat race winners. Michael Wesselman ( Bargersville,IND.) was the winner of the B-Main.

Starting on the outside of the front row, Ledford led the first lap. McKinney moved by Ledford to take the lead on lap two. Ledford was able to pull a cross over move on McKinney, but McKinney was able to move back into the lead. After a lap seven caution, track champion Allen Weisser ran side by side with Ledford for second before moving ahead on lap 11. Josh Harris closely followed in fourth and Hastings in fifth. Weisser slipped by McKinney for the lead on lap 13, but McKinney, running the top, came back on the next lap to take the lead. As the leader overtook lapped cars, Ledford got by Weisser for second. Two laps later, Ledford was boxed in by slower cars and Weisser reclaimed second. Two late race cautions, Weisser and Ledford dueling for second, could not stop McKinney as he picked up his eighth Fairbury win of the year. Weisser, Harris, Ledford, Brad DeYoung, Hastings, Randy Shuman, Alan Stipp, Michael Ledford,and Nick Neville completed the top ten.

Ewing took the lead at the start of the 25 lap, $1500 to win race. Eyes were on Torin Mettille, seventh starter, as he worked his way thru the pack. With the help of a lap 12 caution, Mettille took the second position and the race for the lead began. Mettille tried repeatedly to overtake Ewing for the lead, but had to contend with Brandon Eskew, who was on his bumper. Ewing, after two second place finishes at Fairbury this year, would not be denied and held on for the win.

“ There is so much pressure racing here at Fairbury,” said Ewing. “ It is awesome that we get to race here. Torin was right there on me. I was just giving it all I had to hang on.” 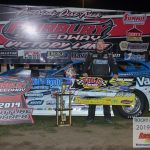 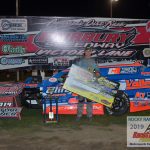 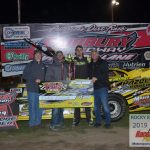 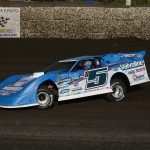 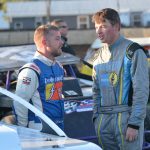 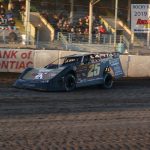 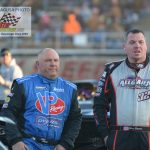 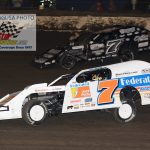 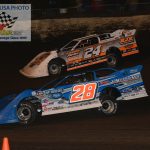 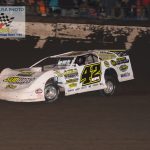 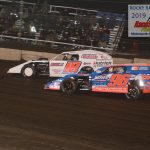 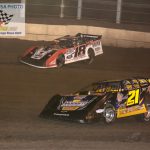 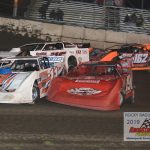 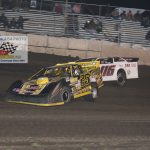