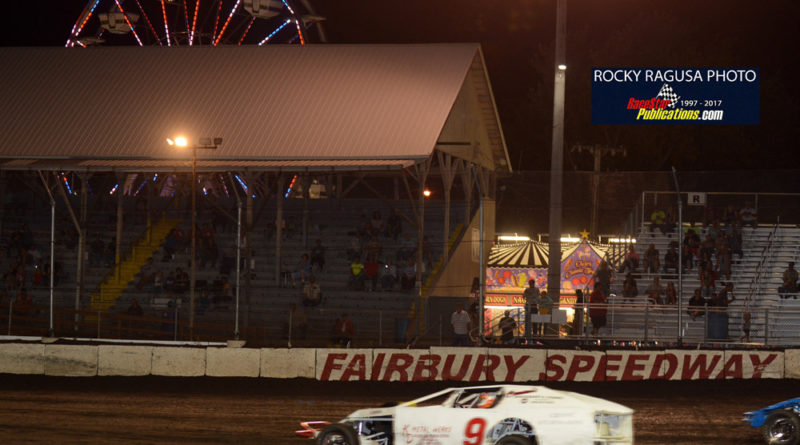 In the 15 lap feature, pole sitter, Brown dropped out before a lap was completed, handing the lead to Hammond. Radke and Rick Thomas stayed glued to Hammond’s bumper early in the race as AJ Meiferdt, the 2017 track champion, quickly moved into fourth position. Following a yellow flag on lap seven, Radke had a good restart and pulled alongside of Hammond. As the two exited turn two, Radke used his momentum to take the lead. Two cautions fell in the closing laps, keeping the top five positions up for grabs. As the field took the green flag on the 11th lap, Thomas was able to take the second spot from Hammond and close in on Radke. Radke stuck his car to the bottom, holding strong, for his first ever feature win. Thomas, Meiferdt, Hammond, Mitch Hahn, Valerie Hurt, Dane Arvin, Kyle Anderson, Michael Schomas, and Tanner Sullivan completed the top ten.

After a hard fought race an exhausted Radke spoke, “First I have to thank my crew chief, Shannon Gross. I couldn’t have done it without you. Six years now and finally got my first feature win at the best track in America.”

Nichoalds , running his patented high side, took the lead at the start, as Pralle stayed even, running on the bottom, followed by Bryant Frechette, Amber Crouch, and Steve Mattingly. As Pralle pressured Nichoalds for the front spot the caution flag waved. The restart had Nichoalds changing his line to the bottom, while Crouch got by Frechette for third. Crouch spun out on the sixth lap, relegating her to the rear of the field. On the restart, Nichoalds led, as Frechette overtook Pralle for second. The first three drivers ran the bottom, while Mattingly ran on the top. Nichoald opened a five car length margin in the waning laps and recorded his ninth win of the season. Frechette, took second followed by Pralle, Crouch battled back for fourth, with Mattingly, Anthony Craven, and Eric Saltzman completing the running order.

“It has been a dream season,” said Nichoalds. “I am really blessed. I have to thank my dad for all the work he puts into this car, plus the rest of my crew, sponsors, and friends.”

Brian Deavers took the heat in the Hobby-Modified race and was on the pole for the 12 lap race. Deavers took command of the race with Mike Petersen running in second. On the sixth lap, Deavers lost control of his car, handing the lead to Petersen. Deavers fought back and regained the lead on lap 10.

Deavers, a former Pontiac Rt. 66 kart racer, pulled away in the end for his first ever win in a Modified. Brendan Patterson, Makinzi Semmens, Macy Vaughan, and Haley Jones followed.

Excited, Deavers commented after the race, “It hasn’t been easy coming from the Hornet class. I have learned a lot. Thanks to my crew and sponsors for their help.”

At the drop of the green flag, Ledford overtook Lueth for the lead and set a rapid pace early in the race. Nick Clubb, Curl, and Jimmy Dehm duked it out for third, in a battle that saw none of the trio back down. Several cautions kept Ledford from walking away from his competitors early in the race. Curl was able to move into second, as Bobby Stremme joined in the hunt. Curl was able to cut into Ledford’s lead and had a opportunity to take the lead from the “Racing Farmer” as a caution waved with six laps to go. On the restart, Ledford quickly pulled away from his combatants and registered his first Fairbury win of the season. Curl, Lueth, Dehm, Stremme, Michael Thayer, Clubb, Dave Lilja, Travis Kohler, and Joey Iliff followed.

“ Congrats to Jeff on his championship,” spoke Ledford.” I have to thank my crew. We have been struggling lately. Some of it has been my own fault, with the nuts and bolts. But tonight everything worked out.”

Bull led the opening laps, before Weaver took over lap three. Bull, looking for his first win of the year, had his car working on the bottom, and reclaimed the lead on lap four. Unzicker worked his way by Weaver and pressured Bull for the front position. Unzicker looked to take the lead on lap nine but a caution kept Bull in the front. Trailing the duo, Weaver, Jay Sparks, and McKay Wenger had fans on their feet in an exciting race for third. Unzicker was able to take command after a lap 11 caution and soon had to contend with slower traffic. Unzicker treaded his way and maintained a comfortable margin over Bull. 12th starter, Mike Glasscock joined in the race for a top five spot. A caution came out with four to go, giving Unzicker’s competition a chance to dethrone the champion. Unzicker was able to hold a five car length lead over Bull for the rest of the race and Unzicker claimed his fifth Fairbury win of the year. Bull took second, Weaver held on to third over Sparks, followed by Glasscock, Wenger, Charlie Olson, Scott Schmitt, Billy Hough, and Curt Spalding.

“This car has worked great since the summer nationals,” Unzicker said.” We have been fine tuning it and doing what we can do for the track surfaces. Last week the track was totally different from this week. Hats off to the Fairbury crew, along with y crew and sponsors. Winning the track championship means a lot to me and my guys. Hopefully we can chase down Rusty Schlenk for the national title”.

This Saturday all drivers will be admitted for free on Driver Appreciation Night. The top ten drivers in the track points will be introduced, and it is the last chance for drivers to accumulate points in the Alkota point series. Hot laps start at 6, 6:30 for time trials, and racing will follow.