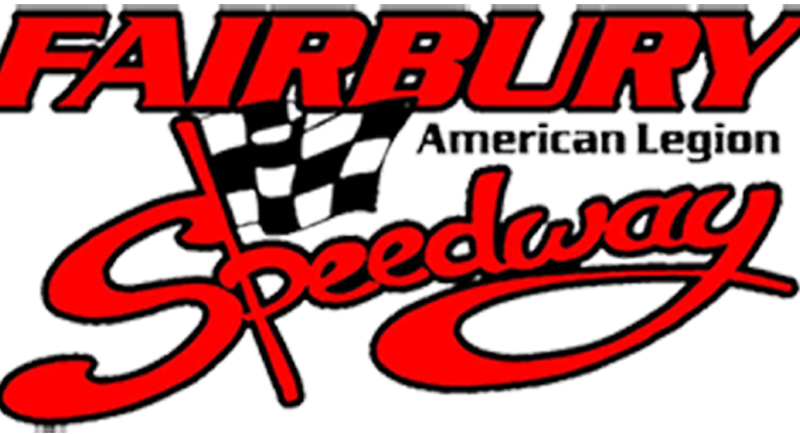 Fairbury,Il. (6/3/21) The Fairbury Speedway had a Thursday night special with Late Models and a combined All Star Circuit of Champions/ Interstate Racing Association Winged Sprint Car race. Both races paid $5000 to the winner and saw Frank Heckenast Jr rallying for the Late Model win. Tyler Courtney led flag to flag in netting the Sprint Car feature.

The All Stars making their first Fairbury appearance since 1995 saw 32 drivers in attendance for a 30 lap feature race. Scotty Thiel laid a lap down at 11.310 for quick time. Lan Madsen, Travis Philo, Tyler Courtney, and Parker Price-Miller took heat race wins. Cap Henry was the winner of the B-main. Courtney and Paul McMahan won in their respective dash races to determine the first 10 starting positions.

Nicknamed “ Sunshine”, Courtney established himself as the driver to beat. Courtney led with Balog and Rico Abreu keeping pace. As Courtney weaved his way past slower traffic, he was able to distance himself from his competition. A caution with two laps to go set up a wild finish. Balog’s failed slide job to take the lead allowed Abreu to sneak by for second. Point leader Courtney was able to pick up his fourth win of the year.

“ I should have started a little lower on that last restart”, explained Courtney. “ I was expecting a slider, but Balog left me just enough room so I had to go for it. We just needed to be a little better on that restart and not give the guy a chance, but I led the lap that counts”.

Weaver took the lead for the start with Babb , Dennis Erb Jr.,Unzicker, and Eric Smith following. After two cautions on lap two, Babb went to the top side of the track and took the lead from Weaver on the front stretch on lap nine. Unzicker moved by Weaver on lap 16 and began to run Babb down. Unzicker went to the top of the track and closed in on Babb. As Unzicker was looking to move into the lead, he slipped in turn one, giving Babb the opportunity to extend his lead. McKay Wenger tagged the wall for a caution with 11 laps to go. On the restart, Unzicker had to contend with Frank Heckenast Jr. . Running side by side with Unzicker, Heckenast Jr. moved into second with seven laps remaining. As the white flag is waved, Heckenast Jr. tries a slide job and contact is made with Babb. Babb slows enough to allow Heckenast Jr. to take over the lead to earn the win.

An apologetic Heckenast Jr. commented in victory lane after his fifth career Fairbury win. “ I feel terrible for Babb. He has been my hero growing up and I would never race him like that. I had Babb setup through here and he pushed really hard in three and four and stopped. It killed my momentum and I thought this is it right here. We were going to lose the race or go for it”.

This Saturday night, Popejoy Inc. will present the annual Fan Appreciation Night. Five Dollars will get you in the gate as another FALS Cup weekly program will be held. 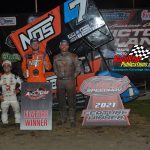 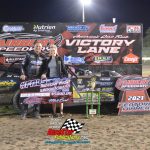