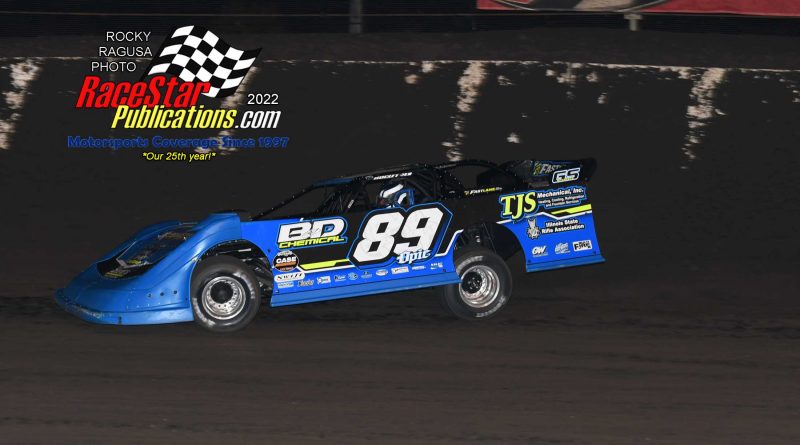 After Last week’s Prairie Dirt Classic that saw entertainment and racing for four days, the track returned Saturday night with a FALS Cup/Alkota night of racing. Billed as the “PDC Hangover” the night was presented by Tool’s Auto Sales and HOTROD Septic Treatment.

Late Models were featured in a 30 lap race. Jake Little got the jump on fellow frontrow starter, Mike Spatola for the lead. Little could pull away from Spatola on the straights, but Spatola quickly caught Little in the turns. As Little began to work his way past slower traffic, Spatola made the pass for the lead as the duo exited turn four. Wasting little time, Spatola held a five second lead as an intense battle took place behind him. Little, Myles Moos, Mike Mataragas, Jordan Bauer, and Mike Provenzano raced the top, middle, and bottom of the track looking for an advantage. A caution fell on the track with one lap to go giving the field one last chance to move to the front. Spatola, motored ahead and claimed his first Fairbury win of the year.

“ It has been a frustrating year.”, said Spatola. “ We haven’t gotten the wins we like. It’s never fun when you get into turn three and you don’t hear a slider coming. You kind of think you have it won. Stuff happens and it worked out.”

Spatola paced the 19 car in attendance during qualifying with a lap of 12.845. Spatola and Little took heat race wins.

After a yellow flag on the first lap, Pontiac’s Michael Ledford motored past Allen Weisser into the lead. Looking to wrap up his second Modified track title, Ledford ran the ragged edge on his way to his fourth Fairbury win.

“ Hats off to the track prep crew,” the 17 year old sensation said.” It was a fun track. I got the lead on the top, but felt more comfortable running the bottom. I knew if I didn’t jump it on those restarts, I could stay ahead of Weisser.”

17 cars were on hand for their 25 lap race that saw Brooks earning fast time honors with a lap of 13.917. Weisser and Ledford were the heat race winners.

There were 15 strong competitors, including five of the top 25 in the latest Stock Car DIRTcar national point standings in attendance for a 15 lap feature race.

Keller led the early stages of the race, but Megan Erwin was following closely. After a caution on the fourth lap, Erwin was able to pull alongside Keller in a race for the lead. On the sixth lap, the pair exited turn four, side by side. Contact was made, resulting in enough damage to end their night. Keller’s son, Braiden inherited the lead as Clubb and Tim Loommis followed, waiting for the first year driver to make a mistake. The three warriors were able to race three wide in the final laps. Loomis (Palo) edged ahead for the lead with two laps remaining and held off Clubb by a car length for his first ever win at Fairbury.

“ Toward the end of the race, everyone was piling on the bottom,” Loomis said. “ I thought there was still something on the highside of 1-2, so I went for it.”

Tommy Duncan has been the class of the field in the CR Towing Sportsman division, Duncan won his race by a straight away and for the Metamora native it was his seventh consecutive win.

“ I was burning up,” an exhausted Duncan said. “ The car is really good now. We are on top of our game and I can’t thank all my sponsors and the fans for their support.”

The Hobby-Modified class continues to grow as 20 drivers were on hand for their 12 lap feature race. Bloomington’s Brian Deavers has been on a tear this year and led green to checkers as he scored his fifth win of the season.

“ This car has been a rocket all year,” Deavers spoke. “ We put a lot of maintenance in our program and are always trying something different.”

Deavers had a lap at 14.985 for fast time in qualifying. Deavers and Gebhardt won their respective heat races.

Another FALS Cup/ Alkota racing night is planned for this Saturday at the fairgrounds in Fairbury. 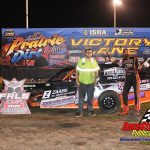 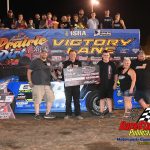 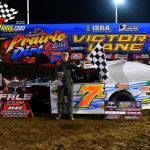 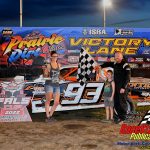 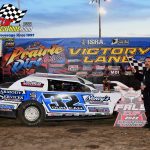 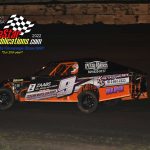 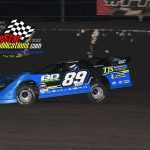 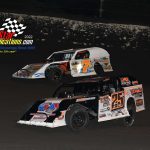 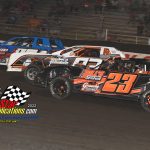 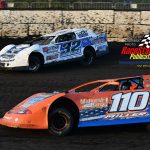